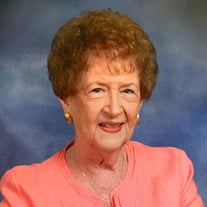 ***MRS. HENDERSON'S SERVICE WILL BE LIVESTREAMED HERE ON OUR WEBSITE*** EVELYN C. YOUNG HENDERSON, born September 9, 1926, passed away on Easter Sunday, April 17th at 5:18 pm at the age of 95. She was born in Dallas, Texas. She moved to Winnsboro, Texas, at the age of six. She was preceded in death by her parents, Gus Young and Maud Stanley Young, her husband Johnnie L. Henderson, her son Johnnie Jr., sister Madeline Young Leath and brother Joe Young. She is survived by her daughter, Jayne Huffman and husband Bruce, daughter-in-law Glenda Henderson, grandsons: Matthew Henderson and Wesley Albin Henderson and wife Stephanie, her granddaughter, Jessica Gardner and husband Reed, and her great-grandchildren: Ezra and Kennedy Gardner, and Kathryn Albin Henderson and soon-to-be Joshua Albin Henderson due in June. Evelyn and the love of her life, Johnnie L. Henderson, married in 1947 during their junior year at East Texas State Teachers College (now called Texas A&M University in Commerce). Becoming a wife and a mother to her two children, Johnnie Jr. and Jayne was the most important part of her life. Even though she was a teacher, she always had time to attend the activities of her children and later grandchildren, traveling to see the many basketball games, track meets, and band performances. Evelyn became a teacher and during her career of 35 years, she taught in Avery, Rylie, Royse City, Forney, Stephenville, W.W. Samuell in Dallas, and returned to Forney for the last 12 years of her teaching career. She and her husband often said they probably held a unique record as they returned to three of the schools a second time. After retiring in 1985, she assisted her husband as the Director of Texas Association of Private and Parochial schools for seven years. This work directed all academic, music, art, sports events at the State-level (similar to UIL). In 2008 before her husband’s death, TAPPS honored Johnnie and Evelyn with an award called the Henderson Cup to be presented to the top schools in the five divisions. Evelyn received many earthly honors in her teaching career. She served on the local, state, and national committees and as an officer for Career Education (VOE/OEA). She sponsored many students to contests and her students performed with great success often competing against schools with much larger enrollments. Her favorite saying to her student was, “You are a winner if you try, but if you do not try, you lose already.” One of her greatest joys after retirement was former students returning to see her, or calling and asking for advice. She often said she was blessed with hundreds of children. When a school was named after her husband and her, she adopted the many teachers and children who taught and attended Henderson Elementary. She enjoyed giving a “pep talk” to the teachers on the first day of school each year. Evelyn continued teaching a Bible Study Class at First Baptist Church Forney until 2018. She continued interest in her church, community, state, and nation. She was an avid reader and never lost touch with the changes happening in the world in which she lived. Funeral service will be at 11:00am, Friday, April 22, 2022 at First Baptist Church in Forney with interment to follow at Hillcrest Cemetery, where she will be laid to rest by her beloved husband, Johnnie Henderson. Her family will receive friends 5:00pm to 7:00pm, Thursday, April 21, at First Baptist Church in Forney. Donations may be made in lieu of flowers to First Baptist Higher Ground 2.0 Building Fund at https://www.shelbygiving.com/app/giving/firspo101t7 or Forney Education Foundation (FEF) at https://forneyisdfoundation.org/donate for grants for teachers.

***MRS. HENDERSON'S SERVICE WILL BE LIVESTREAMED HERE ON OUR WEBSITE*** EVELYN C. YOUNG HENDERSON, born September 9, 1926, passed away on Easter Sunday, April 17th at 5:18 pm at the age of 95. She was born in Dallas, Texas. She moved to Winnsboro,... View Obituary & Service Information

The family of Evelyn Henderson created this Life Tributes page to make it easy to share your memories.

***MRS. HENDERSON&#39;S SERVICE WILL BE LIVESTREAMED HERE ON OUR...

Send flowers to the Henderson family.