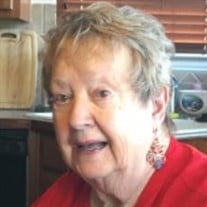 Fay Jean Lumley, passed away into the presence of her Lord and Savior on July 25, 2020 at her home with her beloved husband at her side. Fay was born November 30, 1928 in Shreveport, La., to Oscie and Etta (Stevens) Whatley, both of whom preceded her in death along with her son, Matthew Drummond and brothers: Coston, Paul and Oscie Whatley. Fay had lived in the Terrell community since 2008 after living in several states including California and Arizona. She married the love of her life, Michael Lumley in the Chapel at Mount Hermon Conference Center where they continued to attend annual couple retreats. These retreats allowed Michael and her the much needed time with connecting with Jesus and each other and they both considered the time as “marriage insurance”. She was strong in her faith and her favorite activity was to help women with biblical and faith based counseling. Fay was trained in counseling by Pastor Bob Achilles along with her attendance at many conferences around the US. She found that women easily confided in her with their concerns and challenges and Fay was able to successfully counsel them with sound theology and scripture. Her thorough knowledge of the Bible and her spirit of helpfulness enabled Fay to assist many in resolving their challenges in life and relationships and she was still helping many by phone until a few weeks before her passing. Fay was a buoyant personality who also loved to entertain and she was an accomplished singer and actress from 1969 to just recently as her health began to decline. She was a member of the Auxiliary of Gideons International from 1986 and was active in California, Arizona and here in Kaufman county where again, her desire to share the love of Jesus with others was a hallmark of her personality. She and Michael were faithful members of First Baptist Church in Terrell where they were both active in the choir where her beautiful voice was a welcome addition to worship. Fay’s gentle spirit and her lovely smile will be missed by all who knew her. She is survived by her husband, Michael Lumley of Terrell; son, Mark Drummond and wife, Connie of Capitola, CA; daughter, Cheryl Martin and husband, Bill, of Payson, AZ; stepsons: Mark Lumley of Lewisville, TX and Simon Lumley of Grapevine, TX; daughter-in-law, Mary Drummond of Gilroy, CA; grandchildren: Benjamin Drummond of Morgan Hill, CA, Nicholas Drummond and wife, Jennifer, of Scott’s Valley, CA, Christine Blackwelder of Gold Hill, OR, Jennifer Drummond of San Bruno, CA, Ashley Drummond of Lucerne, CA, Ian Lumley and Adam Lumley, both of Flower Mound, TX; great grandchildren: Addie Mae Drummond and Juliette Drummond; cousin, Nellie Porterfield and husband, David, of Duncanville, TX; sister-in-law, Ann Lumley of Frinton on Sea, England; nephews: Lee Whatley and wife, Cathy, of Roanoke, TX, Richard Whatley and wife, Paula, of Orange, CA, David Whatley of St. Charles, MO and Robert Whatley of Tucson, AZ as well as other extended family, church family and a host of friends, all of whom loved her dearly. A memorial service celebrating Fay’s life and legacy will be at 1:00pm, Thursday, August 20, 2020 at First Baptist Church in Terrell. The family requests in lieu of flowers, and in honor of Fay's love for sharing the Gospel with others, memorials be made to Gideon International www.gideons.org

Fay Jean Lumley, passed away into the presence of her Lord and Savior on July 25, 2020 at her home with her beloved husband at her side. Fay was born November 30, 1928 in Shreveport, La., to Oscie and Etta (Stevens) Whatley, both of whom preceded... View Obituary & Service Information

The family of Fay Lumley created this Life Tributes page to make it easy to share your memories.

Fay Jean Lumley, passed away into the presence of her Lord and...

Send flowers to the Lumley family.