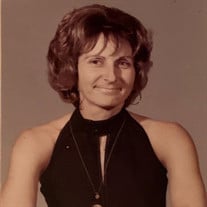 Faye Wilson of Terrell passed away peacefully on January 16, 2022 from an unexpected brief illness with her family by her side. Donna Faye Riley was born July 30, 1940 in Dallas, TX to Dorothy Taylor and James Riley. She grew up in Dallas and attended Dallas public schools. Faye married W.T. Wilson on October 1, 1955. They made their home in Terrell and to this union five children were born. Faye was a stay at home mom for many years, devoting all of her time to her children and all of their activities, including Boy Scouts, Girl Scouts, band, softball, track, drill team and 4-H. Where the kids were, that’s where she would be. She later went to work in the clothing business and became manager for many years at Fashion Outlet Store in Dallas. She also owned her own clothing store in Terrell, The Added Touch. She then spent 37 years at Wal Mart in Terrell holding numerous positions. During this time, she spent many years serving the Terrell Chamber of Commerce Visitors Center. She finally retired at age 79. She was a tireless supporter of anything involving her children and grandchildren, even with her busy work schedule. Faye was the guiding force behind the values of multiple generations of her own family and all those who knew her. She was preceded in death by her parents, Dorothy and James, her beloved sister, Edna, son-in-law, Greg Cobern and the greatest heartbreak of her life, her two sons: W.T. “Buddy” Wilson , Jr. and James Craig Wilson. She leaves to cherish her memory to W.T. Wilson, children: Gail Langley and Harold Langley, Karen Wilson, Julie Young and Steve and Donna Smith; grandchildren: Chris and Crystal Langley, Jamie Wilson and Josh Duncan, Justin Sanders, Rosa Saldivar and Cristina Cobern; great grandchildren: Joseph and Deja Langley, Kason Duncan, Arlo Sanders, Andrew and Dylan Barnes, Rayelin Smith and Star Diaz; great-great grandson, Ace Langley and one soon to be announced great-great granddaughter Langley; siblings: Sonny and Nora Riley, Cathy and Larry Whitis, Mike and Ginny Zvolanek as well as a host of nieces, nephews, and other relatives. Along her path in life, Faye lovingly added to her family tree taking in many who felt lost or rejected. She always made room in her heart and home and there was always a place at her table. A host of children who are children no more still call her Granny Faye to this day. She never turned her back on anyone and never gave up on anyone. For this reason and many more, she was respected by all know knew her. She will be missed until we meet again. Funeral service will be held at 2:00 p.m., Friday, January 21, 2022, at Max Slayton Funeral Chapel, with a private interment to follow. Visitation will be from 5 p.m. to 7 p.m., on Thursday, January 20, 2022, at Max Slayton Funeral Chapel.

Faye Wilson of Terrell passed away peacefully on January 16, 2022 from an unexpected brief illness with her family by her side. Donna Faye Riley was born July 30, 1940 in Dallas, TX to Dorothy Taylor and James Riley. She grew up in Dallas... View Obituary & Service Information

The family of Faye Wilson created this Life Tributes page to make it easy to share your memories.

Faye Wilson of Terrell passed away peacefully on January 16,...