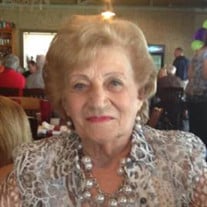 Virginia Florelle "Flo" Burks, lifelong Royse City resident, passed away peacefully into the presence of her Lord and Savior, Jesus Christ, on the morning of October 23, 2020 at her home with family at her side. Flo was born January 12, 1923 in Royse City and welcomed into Heaven by her parents, James Michael “Mike” and Virginia Sue “Dink” Terrell Cookston, her husband William Ray “Boogar” Burks, Sr., son, James Richard “Ricky” Burks, grandson, Michael Scott Burks, brother, Terrell Marion "Sonny" Cookston and his wife Athalee and sister Helen Cookston. Flo lived her entire life as a resident of Royse City having been born at the Cookston Hotel and Café on Main St., which her parents owned. She lived at the Cookston Hotel with her family and graduated from Royse City High School in May of 1940. Later that same year, Flo married the love of her life, dance partner, and her best friend, William Ray Burks on Christmas Day. She then for the first time lived in a house with her new husband. A few years later, they built a home on Josephine St. and lived the remainder of almost 98 years of her life. Together she and “Boogar” had 43 wonderful years until his passing in 1983. Flo stayed active in her hometown all of her life, especially with her church, First United Methodist. She was a born in member, where she was the longest and oldest member of the First United Methodist Church of Royse City. She was active in many ministries including the United Methodist Women’s Group and their missionary visions. In 2008, the FUMC Prayer Room was named in her honor in recognition for the tireless devotion Flo had for sharing the Gospel and serving so faithfully every chance she could. She enjoyed fellowship and was an active player with the Women’s Canasta group along with many of her friends. Her creativity and ingenuity in making something out of nothing was well known by her family, friends and the community and it was often said that if you gave Flo a table knife, a pair of scissors and drinking glass, she could build a shopping mall! She loved to read and take trips to Choctaw where her smile was a welcome sight to other visitors as they enjoyed the gaming, dining and one-of-a-kind memories. Flo’s heritage in Royse City was formally recognized in 2019 when she was selected overwhelmingly by the civic leaders to be the Grand Marshal of the Royse City Christmas Parade at the age of 97 bringing full circle the rich history, tradition and exciting future of Flo’s (not so little) hometown! Of all her accomplishments, though, Flo was the proudest of her family. Being their Mama, Memaw and great grandmother brought her the greatest joy seeing her and Booger’s legacy of love, commitment and devotion play out every day in the family they created…”all because two people fell in love”. While her family has sadness with a world without Flo, they each take comfort in her daily walk with Him and the testimony that she lived by, “God has been so good to me!” Her smile, her laughter, her independent spirit and generous heart will be missed by all who knew her but her love will live on in each life that she touched. Flo leaves to carry on her heritage of unconditional love to her sons: Jerry Burks and wife Linda of Union Valley, William Ray Burks, Jr. and wife Beverly of Rockwall, Carol Burks and wife Elaine of Royse City; her daughter Suzy Hass and husband Jeff of Terrell; grandchildren: Chris and Vanessa, Treva and Arlis, Rusty and Natoma, Brandee and Kenneth, Richie and Ashley, J.C. and Jenn, Dana and Eric, Shanda, Jennifer and Matt, and Clayton and Alex; great grandchildren: Jessica, Lauren, Michael, Bailey, Marla, Braden, Ashley, Austin, Landen, Alexis, Brody, Brock, Hogan, Palmer, Makayla, Colby, Tanner, Maddie, Macie, Garrett, Addy, Mac and Izzy; and her first great great grandchild on the way as well as numerous nieces, nephews, other relatives, beloved church family and a host of cherished friends. Flo's celebration of life will be held at 11:00 am Tuesday, October 27, 2020, at Big Sky Event Hall, 7508 Co. Rd.2584, Royse City, Tx 75189, with interment to follow at Royse City Cemetery. Family will receive friends Monday, October 26, 2020, from 4:00 pm to 8:00 pm at First United Methodist Church, 305 N. Josephine St., in Royse City. In lieu of flowers, the family requests memorials be made in Flo's name to First United Methodist Church Stained Glass Fund 305 N. Josephine St. Royse City, Tx 75189.

Virginia Florelle "Flo" Burks, lifelong Royse City resident, passed away peacefully into the presence of her Lord and Savior, Jesus Christ, on the morning of October 23, 2020 at her home with family at her side. Flo was born January 12, 1923... View Obituary & Service Information

The family of Flo Burks created this Life Tributes page to make it easy to share your memories.

Send flowers to the Burks family.