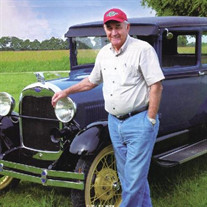 Mr. Frank Williams, of Chisholm, passed away peacefully on the morning of October 29, 2019. Frank was born July 10, 1929 in Chisholm to Byron and Effie Gertrude (McDaniels) Williams both of whom preceded him in death along with his siblings: Charles Graham Williams, James Byron Williams, Rueben (R.A “Rabbit) Addison Williams, Mary Frances Tillerson, Anna Kate Burt, Thomas Lemuel Williams and Roy Eldon Williams as well as the mother of his sons, Frances Marie Williams. Being born and raised in the Chisholm community, Frank had a wonderful opportunity to see and experience all the changes over the decades. In his youth, he attended Chisholm schools and, at the age of 14 when his dad was employed by Terrell State Hospital, Frank then moved up to Terrell High School where he was an accomplished athlete in football. In recognition for his quickness and his agility on the field, Frank was awarded the 1946-47 ‘Hustlin’est Player’ trophy by coaching staff. After graduation from THS, Frank worked for the A & P Grocery in Terrell until a transfer to Dallas. He decided to enlist in the US Navy where he served from 1952-1956 during the Korean war. He was stationed at naval bases in California, Texas and Florida during his enlistment. During his service, he attained the rate of AM2 (naval aircraft maintenance) which would influence his career choices after his honorable discharge. Frank’s experience in aviation mechanics and repair enabled him to secure positions at several commercial aircraft companies including Braniff and American Airlines. He worked the longest for AA retiring in 1988 after 29 years of loyal and dedicated service. After retirement, Frank could spend more time with his hobby of restoring and exhibiting Model A cars (his very first car at the age of 16) having restored over 44 cars for private purchase and antique automobile expositions. Moving back to Chisholm in 1983, Frank enjoyed being “home” and getting the chance to visit with friends near and far. He was a member of The Church at Buffalo Creek where he was a welcome and treasured part of worship in that he knew, firsthand, all about the history of Chisholm. He was fond of telling and sharing the wonderful heritage of his ‘little’ hometown and he made instant friends of all he met. Frank’s legacy of hard work and his knowledge of the area he grew up in will be missed by all who knew him. Frank is survived by his sons: Gary Randall Williams of Dallas and Rev. Wallace A. Williams and wife, Kitty, of Garland; grandchildren: Kenna Elizabeth Swift and husband, Anthony, Ryan Taylor Williams and Lindsey Marie Toy and husband, Kevin; great grandchild, Rowan Wallace Swift as well as other extended family and a host of friends who loved him dearly. Funeral service will be at 11:00am, Monday, Nov. 4, 2019 at Max Slayton Funeral Chapel with interment to follow at Chisholm Cemetery. The family will receive friends 3:00pm to 5:00pm, Sunday, Nov. 3, 2019 at the funeral home. For those wishing, memorials in Frank’s honor may be made to the McLendon Chisholm Fire Dept, 1250 S State Hwy 205, Rockwall, TX 75032.

Mr. Frank Williams, of Chisholm, passed away peacefully on the morning of October 29, 2019. Frank was born July 10, 1929 in Chisholm to Byron and Effie Gertrude (McDaniels) Williams both of whom preceded him in death along with his siblings:... View Obituary & Service Information

The family of Frank Williams created this Life Tributes page to make it easy to share your memories.

Mr. Frank Williams, of Chisholm, passed away peacefully on the...

Send flowers to the Williams family.