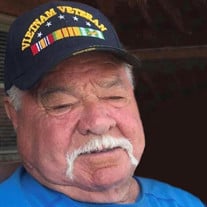 Frankie E. Smith, of Terrell, passed away on Jan. 27, 2021 in Dallas. Frankie was born November 8, 1940 in Dallas, to Clarence Everett and Catherine Estell (Carr) Smith, both of whom met him in Heaven along with his siblings, Nellie Vernott and Dwight Smith. Growing up in Dallas on 52nd St was big part of Frankie’s younger years where the times were simpler and kids could go and have fun with playing games in and around their homes with protective neighbors and great imaginations! Frankie, Dwight and Shirley were like the Three Musketeers: “one for all and all for one” and together they made every day an adventure for themselves and their many friends. Frankie enlisted in the Navy where he served proudly and with honor. After being honorably discharged, he married the love of his life and best friend, Lynda Bond, on June 18, 1966 and together they had a wonderful marriage filled with love and devotion. Frankie was a skilled plumber and he was a member of UA Local Plumber and Steamfitter’s Union 100 in Dallas and had achieved his certification as a master plumber. He was also a 32nd degree Mason with his membership at the Bloomfield Masonic Lodge #112. In his spare time, Frankie loved time with family the most but he also enjoyed hunting, growing vegetable gardens (where everyone loved getting his harvests!), fishing, and racing with cars that were competing in Top Fuel and Top Alcohol classes. His ever-present smile and generosity were well known among all of Frankie’s friends and he will be missed by everyone whose life he touched. Frankie is survived by his beloved wife of almost 55 years, Lynda Smith; son, Mark Smith and wife, Michelle; daughter, Lori Smith and husband, Eddie; grandchildren: Micah Garcia, Jordan Smith, Mickey Smith, Marleigh Smith, and Jaci Smith; siblings: Shirley Penny, Vickie Hunker and husband, John, and C.E. Smith and wife, Vicki as well as numerous beloved nieces, nephews, extended family and a host of friends. Funeral service will be at 11:00am, Tuesday, Feb. 2, 2021 at First Baptist Church in Terrell with his brother, Rev. C.E. Smith officiating. Interment, including military honors, will follow at Oakland Memorial Park in Terrell The family will receive friends 6:00pm to 8:00pm, Monday, Feb. 1, at Max Slayton Funeral Chapel. For those wishing, memorials may be made to St. Jude Research at www.stjude.org.

Frankie E. Smith, of Terrell, passed away on Jan. 27, 2021 in Dallas. Frankie was born November 8, 1940 in Dallas, to Clarence Everett and Catherine Estell (Carr) Smith, both of whom met him in Heaven along with his siblings, Nellie Vernott... View Obituary & Service Information

The family of Frankie E. Smith created this Life Tributes page to make it easy to share your memories.