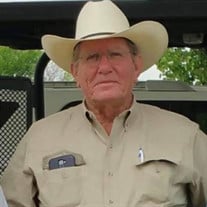 ***At the request of Mr. Nall's family, his service will be Livestreamed on our Facebook page, Max Slayton Funerals and Cremations. Please "like" our page and the notification will appear when the funeral becomes available to view*** Fred Roy Nalls, longtime and well known Terrell resident, passed away on Jan. 9, 2021 with family at his side. Fred was born October 15, 1942 in Kaufman, TX to Rufus and Katherine Nalls, both of whom preceded him in death along with his son, Jack Proctor, Jr., grandsons, Casey Shane Babovec and Coby Bostick, and siblings, Wanda McGlaun and Eddie Nalls. Fred was born and raised in Kaufman county and saw first-hand the many changes in the communities over eight decades. He had a generous heart for others and, throughout his life, many residents were (many times unknowingly) recipients of Fred’s quiet kindnesses over the years. He was a proficient painter and he owned and operated his own business, Nalls Painting. Fred’s humbleness, honesty and integrity in every project he took on quickly earned him a premier reputation in Kaufman county and surrounding areas with both commercial and residential customers. He loved meeting people and his genuine smile and positive outlook made every interaction relaxed and easy. Everyone who knew Fred considered him a loyal friend and, when others happened to meet him, an instant friendship grew immediately because he just never met a stranger. When not working, Fred enjoyed raising and helping train bird dogs for hunting. He also enjoyed his cattle and there were many wonderful days that he passed riding his four-wheeler at the leases where his herds grazed. Once again, Fred’s authentic personality made him a favorite of the many landowners, ranchers and farmers. His word was his bond and all who met him knew that what ever he spoke, it was 100% truth. As much as Fred enjoyed working with his hands at painting and the land with livestock, his daily priority was always his family. His love for every member of his family was a known fact and there were many gatherings organized and hosted by Fred and Sissy where he cooked any dish that was requested alongside his famous grilled steaks. He was a loving husband, devoted father and grandfather and beloved brother, uncle and friend. A man of sound character and of great heart, Fred will be missed by so many who knew that his quiet strength and gentle toughness is, truly, the last of a rare breed and his legacy will be cherished and carried on by his family and his many friends. Fred is survived by his wife, Sissy Nalls; son, Mark Nalls and wife, Teresa; daughters: Angela McKinney, Donna Tomerlin and husband, Marc, Marcia Proctor and Stacie Nalls as well as Jesus Pacheco, who Fred thought of a son and Jesus’ family; grandchildren: Kelli Coffey and husband, Ryan, Devin Nalls and wife, Judy, Delaney Vega and husband, Armando, Clayton Tomerlin, Kelsey Bostick and Arick Khurramov; brother, John Thomas Nalls; sister, Glenda Tonn; sister-in-law, Pattie Nalls as well as nieces, nephews, extended family and a host of friends. Funeral service will be at 1:00pm, Wednesday, Jan. 13, 2021 at Max Slayton Funeral Chapel with interment to follow at Fox Cemetery in Kaufman, TX. His family will receive friends 5:00pm to 7:00pm, Tuesday, Jan. 12, at the funeral home.

***At the request of Mr. Nall's family, his service will be Livestreamed on our Facebook page, Max Slayton Funerals and Cremations. Please "like" our page and the notification will appear when the funeral becomes available to view*** Fred Roy... View Obituary & Service Information

The family of Fred Nalls created this Life Tributes page to make it easy to share your memories.

Send flowers to the Nalls family.