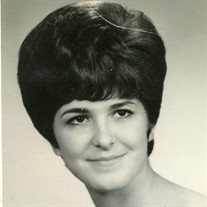 Freida Sue (Suzy) Ables Ward, of Terrell, passed away peacefully on August 6, 2019 at her home with her family at her side. Suzy was born April 23, 1949 in Terrell to Andrew Carroll and Thelma Katherine (Morrison) Ables, both of whom preceded her in death along with her sister, Glenda Kay Shanks, nephews: Clint Ables and Isaiah Blasius. Suzy was a 1967 graduate of Terrell High School and worked for the City of Mesquite and the City of Garland in the municipal engineering departments for many years until her retirement. After retiring, she was able to do the one thing she loved more than anything: spend as much time as possible with her family. She had a smile that could light up every room she walked into and her fun personality made every conversation with Suzy a pure delight. She enjoyed crocheting and doing all kinds of arts and crafts as well as cooking for those she cared for. Suzy had a firm relationship with her Lord and Savior and she was a member of Grace Temple Baptist Church. Her love for her family and her ancestry was the first thing a new friend found out about Suzy and the legacy of unconditional love and devotion will be proudly carried on by her children, grandchildren and great grandchildren for generations to come. Suzy is survived by her husband, Roy Ward; children: Lisa Kelly (Kenneth), Lenni Davidson, Angie Cupps (Shane) and Ashley James (John); grandchildren: Brandon, Katelyn, Keeli, Hannah, and Grace; 5 great grandchildren; brother, Butch Ables; brother-in-law, Jerry Shanks as well as numerous nieces, nephews, extended family and friends. Funeral service will be at 3:00pm, Sunday, Aug. 11, 2019 at Max Slayton Funeral Chapel with Pastor Brian West officiating. A private interment will be held at a later date at the Ables Family Section at Oakland Cemetery. In lieu of flowers, the family requests that donations be made to the Cerebral Palsy Foundation at www.cerebralpalsyguidance.com.

Freida Sue (Suzy) Ables Ward, of Terrell, passed away peacefully on August 6, 2019 at her home with her family at her side. Suzy was born April 23, 1949 in Terrell to Andrew Carroll and Thelma Katherine (Morrison) Ables, both of whom preceded... View Obituary & Service Information

The family of Freida Ward created this Life Tributes page to make it easy to share your memories.

Send flowers to the Ward family.