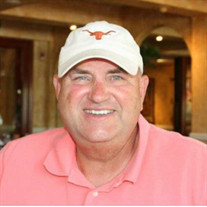 Garry Dale Yancey, longtime resident of Terrell, Texas, passed away peacefully into the presence of his Savior on April 13, 2018, with his family by his side. Garry was born October 30, 1947, in Russellville, Alabama, to Jefferson D. Yancey and Mary Ruth Warren Yancey, both of whom have preceded him in death. Garry’s family lived in Detroit, Michigan, after the War. Financial times were very hard for his family during that period, and they returned to Alabama being helped by their large, loving families. Garry’s father pursued a job in Tampa, Florida, and the family soon found themselves living among palm trees, beaches and soft breezes. A strong work ethic developed among Garry and his siblings when his father became a caretaker of well-known camps on the shores of Lake Magdalene in Tampa. Garry’s family lived in a house at the camp and on Saturdays Garry was mowing, cleaning up the huge lawn area, and cleaning out the orange groves and horse stalls. During the summer at the camp, Garry taught canoeing, horseback riding, sailing and swimming. Precious family memories were created during this time spent at Camp Oconee. Garry graduated from Chamberlain High School in Tampa where he played football. After high school, he traveled by bus to Miami, Oklahoma, to attend Northeastern A & M Junior College. The year and a half as a Golden Norseman at NEO would forever seal a lifelong bond with the college, “Once a Norseman, Always a Norseman.” While playing football at NEO, the team won the National Junior College Championship in Savannah, Georgia. Garry was listed in Who’s Who in National Junior Colleges and on campus. He grew as a person and set goals during his time at NEO. Florida State University recruited Garry, but during the spring game he was injured and sidelined. Wanting to continue to play ball, but fighting an injury, he transferred to North Texas State University, a school that recruited him earlier, and where he met the love of his life, Vivian. Upon graduation, Garry began his coaching adventure. Football took him to Carrollton at DeWitt Perry Middle School, during which time he also earned his Masters of Education degree at North Texas State University. He moved on to coach at his beloved NEO Jr. College in Miami, OK, head coach at Cascia Hall in Tulsa, assistant coach at Rockwall High, Athens High, Malakoff High, LaPoynor High (where he took his political science class to meet and shake hands with then presidential candidate, Ronald Reagan), Willis High, and Terrell High School. Throughout his coaching career, he had the honor of getting to know students and their families. Coach would be there for them in the good times and in the bad. He was able to watch his students become leaders and difference-makers in all fields, but Coach’s goal was to see each student become a productive, positive, caring citizen. While coaching in Terrell, Garry became the youth director at the First United Methodist Church. Each year his kids traveled to near and far away places and were involved in many activities. He knew that sometimes just having fun with others would bring out the “Christian Spirit.” He loved all of his kids . . . both students at school or youth at church. He was always the same with all of them . . . they knew what to expect from him, and soon realized he was a big Teddy Bear under all the barking and orders. To know him was to love him. Coach spent his entire career in the kid business and at retirement in 2008, he began traveling with adults . . . and away he went . . . on cruise ships, planes, trains and golf carts. On each trip there were many stories to tell and each person was a new friend. This big man never met a stranger, finding these adventures most rewarding. Garry and Vivian left their suitcases open on the floor of their home, always ready for the road. Although he did not attend the University of Texas, he wore his Texas cap all over the world because he would instantly be recognized as a Texan from the USA. Garry had unlimited energy. He would stay up until 2 a.m. watching Westerns, Perry Mason or Home Improvement shows and then get up the next day ready for a new adventure, sometimes to his precious lake house on Beaver Lake in Arkansas, where he entertained many friends and relatives. Football was his life and he was able to experience that passion even more when he watched his son, Blake, play ball in Terrell. He was a very proud father and was completely absorbed with his grandchildren, Colt, Cannon and Camryn, having high expectations of them, just as he had for all of his students. Garry is survived by his wife of nearly 45 years, Vivian Yancey, son, Blake Yancey and wife Angela of Van Alstyne, grandchildren Colton, Cannon, and Camryn, his brother, Jerry Yancey and wife Kathy, his sister, Nancy Jellerson and husband David, sister-in-law, Donna Patschke and husband Nolan, Uncle Doss and Aunt Margert Warren, uncle, Ed Strong, nieces, Allison and Amanda, nephews, J.D. Yancey and wife Judy, Eric Jellerson and wife Soline, numerous cousins, extended family, church family and fellow travelers. A Celebration of Garry's life will be held at 1:00pm, Thursday, April 19, 2018 at First United Methodist Church in Terrell. The family will have a time to visit and gather with friends to share special memories of Garry 5-8pm, Wednesday, April 18, 2018 at Max Slayton Funerals and Cremations. In honor of Coach Yancey's dedication to students and the youth ministry, his family asks that, in lieu of flowers, donations be made to the First United Methodist Church of Terrell, 503 W. College St., Terrell, 75160.

Garry Dale Yancey, longtime resident of Terrell, Texas, passed away peacefully into the presence of his Savior on April 13, 2018, with his family by his side. Garry was born October 30, 1947, in Russellville, Alabama, to Jefferson D. Yancey... View Obituary & Service Information

The family of Garry Yancey created this Life Tributes page to make it easy to share your memories.

Send flowers to the Yancey family.