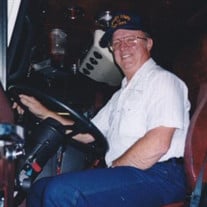 Gary Harwell, beloved husband, father, brother and friend, passed away from long term illnesses and Covid19. Gary Stephen Harwell, Sr. was born in Terrell, Texas to Jim William Harwell and Lola Bessie (Stephens) Harwell, both of whom preceded him in death with Jim passing in 1994 and Bessie in 1984. Gary was also met in Heaven by his brothers, Dennis Ray Harwell who passed in 2006 and Rayford Lewis Harwell in 2015. Gary married Linda Kay Feagin May 8, 1964 in Terrell and to this union two sons were born. He also worked for the Garland Fire Dept. and retired in 2003 after 31 years of dedicated and loyal service. In 2003, he was diagnosed with Multi Myeloma and, in 2019, with CIDP (Chronic Inflammatory Demyelinating Polyneuropathy). Even though these diagnoses were challenges, Gary’s constant sense of humor and ever-present smile were always the best . His easygoing personality and ability to make everyone feel instantly at ease was a hallmark of his friendly personality. He had a generous and loyal heart for his family and friends and would willingly give the shirt of his own back to anyone who needed it. A loving man who put others first, both professionally and personally, Gary will be greatly missed by all who knew him. He is survived by his beloved wife of over 56 years, Linda Harwell; sons: Gary Stephen ‘Steve’ Harwell and wife, Florence LaCour Harwell, Jason Lloyd Harwell and wife, Misti Waller Harwell; grandchildren: Tiffany Lynn Harwell, Anita Kay Harwell, Olivia Lynn Harwell, Russell Lloyd Harwell and Rachael Gail Harwell and great-grandson, Jayce Lee Harwell. Also survived by his siblings: James Harwell, Joseph ‘Joe’ Arthur Harwell and wife, Claudette, Jessie Nadine Harwell Day and husband, Jerrell; brother-in-law, William Paul Feagin of El Camp, Tx; sister-in-law, Rita Jo Lawrence Feagin of Paris, Tx as well as numerous nieces, nephews, extended family and a host of friends, all of whom will continue to cherish the impact Gary had in their lives. A Graveside service will be at 10:00am, Saturday, September 12, 2020 at Weaver Cemetery where he will be laid to rest. In lieu of flowers and in honor of Gary and Linda’s tireless caretaking of the cemetery records and grounds, Gary's family asks that donations may be made to Weaver Cemetery Association, 642 N. Rockwall Ave., Terrell, TX, 75160.

The family of Gary Harwell created this Life Tributes page to make it easy to share your memories.

Send flowers to the Harwell family.