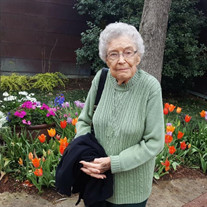 Geneva ‘Maxine’ Vick passed away on June 17, 2019. Maxine was born on July 3, 1927 in Seymour, Texas to Hazel B. (Little) and John C. Wages. Both of whom preceded her in death, along with her loving husband, Billy R. Vick and her siblings: Hobert Wages, Inez Pruitt, Dale Wages, and Glenna Clayton Tilson. At a young age Maxine’s family moved to Canton, Texas where they raised her and her siblings. She attended school there and would also graduate high school there. After graduation she “just happened” to meet her husband, and the love of her life, Billy R. Vick. They married on August 28, 1948 in Terrell at Maxine’s parents’ house. They went on to make their home in Terrell and she started working at Lavender Beauty Shop with Minnie and Lucille Beard as a hairdresser. Later, Maxine went to work at the Terrell State Hospital. Once a position as a hairdresser there opened, she graciously accepted. Though she loved working she decided to stay at home when she and Billy had their son, Jerry. While home Maxine would often cook wonderful meals and bake delicious treats for her family and friends. Most notably her coconut cream pie that earned the title “best in the whole universe” from Jerry and many others. Maxine was a faithful member of the First Christian Church in Terrell. In the later years she would take note as to who was not at church on Sundays. She would go home, and hand write letters letting them know she missed them and was praying for them. Earning the title “Card Lady”, even making an office in her home where she could work. Maxine sent out hundreds of letters to those she missed, people who couldn’t leave their homes, and loved ones she was just thinking about. If Maxine knew you, you received a letter. She often was gifted with cards and stamps from people who knew she sent letters to so many people. If she needed more supplies, she would get in her 98’ Oldsmobile and go to the store. Maxine could often be seen driving around and everyone knew who she was by her bright smile and her car. Maxine is survived by her son, Jerry Vick and his wife Ann; grandsons: Bradley Vick and Erik Vick; great grandchildren: Braylon and Braylee; mother of her great grandchildren Brandy Vick; her brother, Joe Wages and his wife, Margaret; sister in law, Linda Williams, and Virginia Vick as well as an abundant amount of nieces, nephews and extended family who will miss her dearly. Funeral service for Maxine will be 11 a.m. Friday, June 21, 2019 at Max Slayton Funerals with a private interment at Oakland Memorial Park. Her family will receive friends an hour prior to service time. Memorials may be made to the First Christian Church at 405 N Adelaide St., Terrell, Texas in Maxine’s honor.

The family of Geneva 'Maxine' Vick created this Life Tributes page to make it easy to share your memories.

Send flowers to the Vick family.