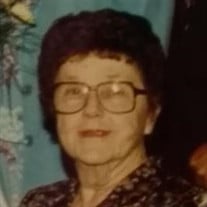 Geneva Geraldine Wiley, longtime resident of Terrell, passed away peacefully from this life on September 7, 2017. Geraldine was preceded in death by her loving parents, Robert L. and Annie Lucille (Black) Wiley and her brother, Robert L. Wiley, Jr. She graduated from Terrell High School after which she attended and graduated from Draughon Business School in Dallas, Texas. Geraldine came back to Terrell to begin an extraordinary tenure at American National Bank which lasted for 42 years until her retirement. She had the reputation of not only taking care of each customer as if they were family but also for her welcoming personality which made both bank patrons and visitors feel instantly comfortable. Her generosity to others with her time and resources will always be remembered by so many as the help she kindly gave, without hesitation, to all she met truly set the standard high for exemplary customer service. She was a longtime member of First Christian Church in Terrell where the friendships made there lasted until her passing. Geraldine also had a strong family devotion and she was her parents’ primary caretaker until their passing. She cherished close relationships with her niece, nephew, great-nieces and -nephews, all of whom kept in touch as the years went by with frequent visits, cards and calls. Geraldine leaves a legacy of commitment, care and faithfulness that her family and many friends will cherish always. Geraldine is survived by her nephews and nieces and their families: Jerry and Lydia Wiley of Terrell, Brenda and Kent Balsley of Lavon, Casey and Meredith Wiley and their family of Canton, Zach and Autumn Wiley and their family of Prosper, Meleah Petkovich and family of Wylie, Richard Tanner of Canton and of course her many friends made along her lifetime. Funeral service will be at 1:30pm, Sunday, Sept. 10, 2017 at Max Slayton Funeral Chapel with interment to follow at Oakland Memorial Park. The family will receive friends 4-6pm, Saturday, Sept. 9, at Max Slayton Funerals and Cremations.

The family of Geneva Geraldine Wiley created this Life Tributes page to make it easy to share your memories.

Send flowers to the Wiley family.