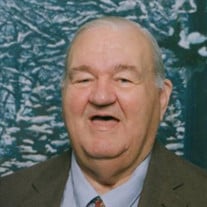 George William Calvert, longtime resident of Terrell, passed away peacefully on April 15, 2020. George was born Jan. 11, 1934 in Blytheville, Ark to Alfonzo Taylor and Ida Francis (Sheppard) Calvert, both of whom preceded him in death along with his daughter, Cathy Elizabeth Calvert and sister, Peggy Jean Clark. After graduation, George enlisted in the US Air Force and was inducted on Jan. 11, 1954 where he served with pride and distinction until his honorable discharge on Jan. 12, 1962. He moved to Texas where he worked for a time with Texas Instruments in Dallas. On April 25, 1969, he married the love of his life, Mary Edith Kindell, and together they moved to Terrell in 1970 where George started his business, Calvert’s Grocery, which was to become a staple in the Terrell Community for over 30 years until his retirement in 2000. George and Mary were loving parents raising their family with a firm foundation in faith and love. He was a faithful and active member of Grace Temple Baptist Church. George’s familiar face became a fixture and a welcome part of the daily routine of so many in Terrell and surrounding communities residents. His advice and counsel would be highly sought after by many who would come by the store to visit and catch up on the area’s “goings-on”. George had a great sense of humor with an ever-present smile and everyone who came into his store always left with their own smile and a better feeling! His love of the Lord enabled George to always treat others with respect and he always helped when help was needed. His principles and ideals were based on his relationship with Jesus. A great man with an even greater heart for his family and others, George will be missed by all whose lives he touched. George leaves his memory to be cherished by his wife of over 50 years, Mary Edith Calvert of Terrell; children: Windell Clinton Calvert and wife, Tara, James William Calvert and wife, Jerri, Annette Hill and Stephen Paul Calvert and wife, Cindy; granddaughters: Ashleigh Kramer, Kynzie Calvert, Allie and Emily Calvert and Ella Calvert; grandsons: Michael and Josh Calvert and Leo Calvert as well as several extended family members and a host of friends. A private funeral service will be held Monday, April 20, 2020 at Max Slayton Funeral Chapel with a private interment to follow on Tuesday, April 21, 2020 at D/FW National Cemetery. The family requests, in lieu of flowers, that donations in honor of George be made to the Disabled American Veterans Charity at www.dav.org.

George William Calvert, longtime resident of Terrell, passed away peacefully on April 15, 2020. George was born Jan. 11, 1934 in Blytheville, Ark to Alfonzo Taylor and Ida Francis (Sheppard) Calvert, both of whom preceded him in death along... View Obituary & Service Information

The family of George William Calvert created this Life Tributes page to make it easy to share your memories.

Send flowers to the Calvert family.