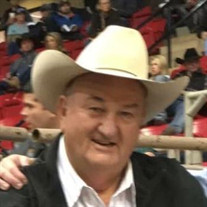 George Alan Chappell was born in Kaufman, Tx on February 4, 1949 to Robert and Frances Chappell and passed away peacefully surrounded by his family on October 14, 2021. George grew up in Kaufman on Star Brand Ranch until moving to Forney where he graduated in 1967. George's success with horses started early, when he won a trophy at the first state 4H show in 1963 while a student at Kaufman High School. One of his most successful stints came in the late 1970s, thanks in part to a horse named Wonder Trouble. In 1977, he set a national record for most points by a calf-roping horse in a single year. That same season, he also won the prestigious All-American Quarter Horse Congress trophy at the largest horse show in the United States. The following year, Chappell sold Wonder Trouble for $15,000, which was a record at the time. George won three AQHA world championships, in 1978, 1983 and 1993. Those came during the years when his ranch was abuzz with activity, sometimes with more than 50 horses at a time. George sold more than 35 world champions including cutting horses, pleasure horses and halter horses. He was a judge at AQHA shows for over 30 years and was considered an appraisal expert in the industry. Throughout the years George was a mentor to so many. He would watch the runs and then their phone would be ringing-either with advice on how to make it better or it was "good run." The stories are unending about his advice, his travels and the horses he has shown and sold. If you wanted a good horse, you knew he would find it. He was known as "princess" when traveling because he would get the back seat..no wonder he liked to travel at night. He knew every good restaurant, where the best chicken fried steak was, the best salad bars, and hands down knew where to go for pie. Just a few quotes from his friends: "he liked a calf horse that would jerk one over backwards;" loved his Kansas City Chiefs; could tell a story like no other; never cheated anyone on a horse deal-if you felt that way, it's because he just out-traded you; he loved his Cowboy channel, Andy Griffith, Three Stooges, Gunsmoke, Rodeos and anything by Aretha Franklin put a smile on his face. George married Paulette March 2, 1987, (according to George's family-the best decision he ever made). When the family first met her, they all thought, "How did he get her?" They lived in Terrell until moving to Collinsville in 2018. "Red" as he called her was by his side through it all. We all got a little jealous when they got to travel to Italy for him to judge a show. Can you imagine George in Italy? While in the hospital he would tell her to go take a break, but not 20 minutes after she was gone, we heard "where's Red?" George is survived by his wife of 34 years, Paulette; son Alan Chappell and wife Allison; daughter Kristin Stooksberry and husband Spencer; sister Beverly Osborn and husband Norb; sister in law Janet Patterson and husband Jerry; sister in law Charlotte Fruge and husband Danny; grandsons Jackson and Jonah Stooksberry; granddaughter Dylann Chappell; nephew Sam Gillispie and wife Mandy; niece Jennifer Gillispie; niece Mary Nibbelin, husband Will and their children Lewis and Wylie; niece Jessica Christy and husband Ross; niece Jennifer Brown and husband Grant; niece Terri and Jerry Albanese; brother in law Phil Schaefer and his wife Jan; great niece Annie Gillispie; great niece Berkeley Brown; and numerous friends who he considered family. If you were George's friend, then he would do anything in the world for you and he was always real with you-whether you liked it or not. He is preceded in death by his parents Robert and Frances Chappell, nephew R.D. Gillispie, and brother in law Don Gillispie. Funeral service will be at 1:00pm, Wednesday, October 20, 2021 at Jeff Smith's Arena, 11300 N. FM 148, Terrell, TX, with interment to follow at Hillcrest Cemetery in Forney, TX. George will lie in state, 5:00pm to 8:00pm, Tueesday, Oct. 19, 2021 at Max Slayton Funeral Chapel. In lieu of flowers, George's family is strongly suggesting that memorials be made to Jake E's Riding Round Up, 10626 FM 429, Kaufman, TX 75142 or at www.jakeesrr.org or to St. Jude Children's Hospital at www.stjude.org.

George Alan Chappell was born in Kaufman, Tx on February 4, 1949 to Robert and Frances Chappell and passed away peacefully surrounded by his family on October 14, 2021. George grew up in Kaufman on Star Brand Ranch until moving to Forney where... View Obituary & Service Information

The family of George Alan Chappell created this Life Tributes page to make it easy to share your memories.

Send flowers to the Chappell family.