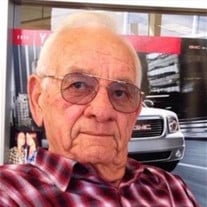 Glenn “Glennie” H. Raines, Jr., passed away peacefully on the morning of November 10, 2019 in Rockwall. Glenn was born January 23, 1935 in Ashburn, GA to Glenn H., Sr. and Ruth Raines, both of whom preceded him in death along with his twin siblings, Pat and Patsy Raines. Glenn grew up in Terrell and attended schools until his graduation from Terrell High School in 1953. During high school, he was an accomplished athlete and he played in his junior year with the 1952 State Champion Tiger football team. He was awarded a scholarship to attend Texas A&M and played a bit for Coach Bear Bryant after which he served in the US Air Force and was stationed in Norman, OK. After his honorable discharge, Glenn came home to Terrell to work at his dad’s dealership, Raines Motor Company, which would begin Glenn’s lifelong career in automotive sales. He met, and married, the love of his life, Joyce Rogers, and together they raised their two sons with a love and devotion to each other that was evidence of true love for all to see. Joyce and Glenn moved to Rockwall 1976 where he worked with the several dealerships eventually working for, and retiring from, Heritage in Rockwall. Glenn had a natural personality and friendly disposition that endeared him to all he met. He was a natural born storyteller and his ability to keep others laughing and interested during his visits was very well known. He had a unique sense of humor matched only by his signature laugh and deep voice as he told and re-told favorite jokes and tales to those lucky enough to get to hear them. Glenn enjoyed the outdoors and loved leaving work at Mussers Automotive to go to the farm and check on his cows. He also treasured any and all time he was able to spend with family and friends. When Glenn wasn’t home planning his next (and highly anticipated!) dove hunts, he would take to the road to travel to Dauphin Island where he would relax and enjoy himself making lifelong memories with the ones he loved. In recent years, his son Bart, lived with Glenn and took care of him. A wonderful man with a heart of gold, Glennie will be missed so much by all who knew him. Glenn is survived by his beloved wife, Joyce Lynn Raines, of Rockwall; sons: Bart Raines of Rockwall and Glenn “Coby” Raines, III, of Palestine; bonus daughter, Tracy Manly Watson and husband, Rick, of Poetry; grandchildren: Angela Raines, Ashley Raines; brother, Larry Raines of Rockwall as well as several nieces, nephews, extended family and a host of friends who will miss him greatly. Funeral service will be at 2:00pm, Saturday, November 16, 2019 at Max Slayton Funeral Chapel. Family will receive friends beginning at 1:00pm to service time. For those wishing and in honor of the timeless love between Joyce and Glenn, donations may be made to the Alzheimer’s Foundation at www.alz.org.

The family of Glenn H. Raines Jr. created this Life Tributes page to make it easy to share your memories.

Glenn “Glennie” H. Raines, Jr., passed away peacefully on the...

Send flowers to the Raines family.