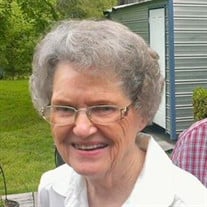 Glenna Wages Clayton Tilson was born on August 21, 1930, and passed away peacefully surrounded by her devoted family on September 8, 2018. Glenna was born in Kaufman County, Texas to John and Hazel Wages both of whom preceded her in death along with her brothers Hobert and Dale and her sister, Inez. She graduated from Terrell High School in 1948 after which she married Charles Clayton on September 6, 1951. To this union, four daughters were born. In 1958, she received her degree in elementary education from Texas Woman’s University fulfilling her dream of sharing her love of education with young minds. Her love of teaching lead to 41 years in the classroom instructing students in kindergarten, first grade and Reading Recovery. Glenna and Charles were married 41 wonderful years and lived in Richardson early in their marriage before returning to their hometown of Terrell. Together, they raised their daughters in a Christian home and instilled in each of them a love for family, education and faith. Charles preceded her in death on May 5, 1992. On July 2, 1998, Glenna married Robert Tilson. She and Bob spent the next 20 years splitting their time between Terrell and his hometown of Plainview. They shared a love of cooking, music and westerns and were inseparable in their golden years. They were members of First Christian Church in Terrell. She is survived by her husband, Robert Tilson, and leaves a legacy of family and love in her daughters and their families: Sharon Clayton, Pattie and Mike Douglas, Becky Waymire and Steve Bryant, and Amy and Terry Burks; her grandchildren: Rachel and Connor Johnston, Andrew and Shelby Douglas, Evan Douglas, Carey Waymire, Clayton and Jessica Waymire, Dani and Michael Cooper, Elizabeth Waymire, Garrett Burks and fiancée Martha Goodin, Spencer Burks and Lauren Burks. Glenna also enjoyed her precious great grandchildren: Bailee Waymire, Wesley and Blakely Cooper and Niklas Goodin; sister, Maxine Vick; her brother and sister-in-law Joe and Margaret Wages; sisters-in-law: Juliet Clayton, Anna Ann Robertson and their respective families. In addition, Glenna leaves to cherish her memory, bonus children who were so near to her heart, Natalia Bermejo, Steve and Cindy Olson and their families. A Celebration of Glenna’s life will be held at 1:00pm, Saturday, September 15, 2018 at First Christian Church, 405 N. Adelaide, Terrell, 75160. The family will have a private interment before her memorial service. The family requests that memorials be made to: Michael J. Fox Foundation for Parkinson's Research, PO Box 5014 Hagerstown, MD 21741-5014 or at www.michaeljfox.org. This will help fund research in pursuit of a cure for the disease that their mom lived with for so long.

Glenna Wages Clayton Tilson was born on August 21, 1930, and passed away peacefully surrounded by her devoted family on September 8, 2018. Glenna was born in Kaufman County, Texas to John and Hazel Wages both of whom preceded her in death along... View Obituary & Service Information

The family of Glenna Wages Clayton Tilson created this Life Tributes page to make it easy to share your memories.