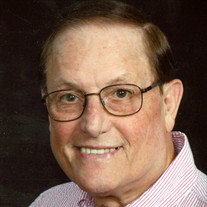 Gordon Laurel Lowrimore, 82, died Sunday March 10, 2019 in Terrell, Texas. He is survived by his wife, of 60 years, Bobbie Lowrimore; his daughter, Leslie Lowrimore of Terrell; his son, Lance Vincent and wife, Tammye, of Tyler; grandson, Josh Vincent and wife, Lauren, of Austin; granddaughters: Bethany Horne of Rockwall, Haley Vincent of Austin, Rachel Horne of Dallas, and Bek Horne of Dallas. Born in Breckenridge, Texas, to L.C. and Frances Lowrimore, he joined the Army at age 19, and served in Korea. After serving in the military, he owned and operated beauty salons in Athens and Kaufman. In 1959, he married Bobbie Jean Gauntt of Athens and they moved to Terrell in 1962. He owned and operated beauty salons in Terrell until he retired in March of 2017. He was faithful member of First Baptist Church in Terrell and loved to sing in the choir. He was a Gideon and traveled and spoke on their behalf often. Funeral service will be 11:00am, Thursday, March 14, 2019 at First Baptist Church of Terrell with family receiving friends beginning at 10:00am to service time. A private interment will be held at Oaklawn Cemetery. The family asks, in lieu of flowers, donations be made to the Gideons International at www.gideons.org or to the FBC-Choir, 407 N. Catherine, Terrell, 75160.

The family of Gordon Lowrimore created this Life Tributes page to make it easy to share your memories.

Send flowers to the Lowrimore family.