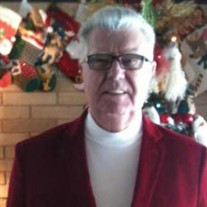 Harold (Sonny) Finley Leigh passed away peacefully surrounded by his family April 29, 2019 in Dallas. Sonny was born Dec. 26, 1936 in Nevada, Missouri to Ada Constance Reynolds and Harold Leigh. Sonny was welcomed into Heaven by so many family and friends including his mother, Ada Tankersley Freret, step-father, Ralph Tankersley, father, Harold Leigh, brother-in-law, Roy Liston, nephew, Cory Case, mother-in-law, Christine Dozier, father-in-law, Lewis Dozier, and sister-in-law, Dorothy Dozier. Sonny moved to the city of Terrell in 1952 where he attended high school and met the love of his life, Sally Ann Dozier and they were the first couple to be married in the sanctuary of First Baptist Church in Terrell on June 8, 1956. Sonny became an aeronautical engineer at LTV in Greenville, Tx (now Raytheon) where he was employed for 38 years before retiring. His hard work and dedication earned his position with the Management Club Committee. Sonny was a longtime and active member of First Christian Church of Terrell where he served as an elder, a member of the Kingdom Builders Class and Chairman of the Church Board for several terms. Sonny had a generous heart even outside the church and, since 1961, he had been a faithful participant with the Masons in the Artesia Lodge #406. He worked with the Boy Scout Troop 390 for many years as well as coaching youth football, baseball, girls’ softball. He stayed athletic as well and played church softball and tennis with the Terrell Tennis Association. His commitment to building a better community allowed him to be appointed to the Terrell Planning and Zoning Commission where his insight to bringing Terrell into the future was esteemed. He and Sally were also members of the Terrell Boat Club since the early 1970s where the friendships made lasted many years. Just recently, and in honor of his extended family’s heritage, Sonny served as the president of the College Mound UMC Cemetery Association for two terms. All these accomplishments were important to Sonny, but nothing was ever as important as his family and his friendships, both of which he treasured. His love and care for Sally and his children, grandchildren and great grandchildren were the most important aspects of his life and Sonny never let a day go by without letting his family know how much he loved them. His loyalty as a friend and his easy-going personality was always a bright spot for others at get togethers and outings and he will be greatly missed. Sonny leaves to celebrate his memory his wife of 62 years, Sally Ann Dozier Leigh; children: Kim Stryker and husband Mitch, Chris Thomas, Jon Leigh and wife, Stacey; grandchildren: Matt and wife Cheri, Jeni, Josh, Rachel and husband Matt, Kevin and wife Savannah, Lauren and Lindsey; great grandchildren: Trent, Hayden, Gavin, Elilah, Landon, Everleigh, and Madalyn; siblings: Janice Liston, Judy Schneider and husband Harry, Jeri Case and husband Rick, Randy Tankersley, Cheri Wagoner and husband Jeff; aunts: Frances Tankersley, Hope Tankersley, Maxine Tankersley and Ruth Flory; bother-in-law, Don Dozier; sister-in-law, Karen "Cookie" Lancaster and husband, Jesse, as well as numerous nieces and nephews, extended family and a host of friends. Memorial service and Celebration of Sonny’s life will be 3 pm Tuesday May 7, 2019 at First Christian Church 405 N. Adelaide St. Terrell, Tx 75160. In Lieu of flowers, the family asks that memorials in honor of Sonny’s dedication to his church may be made to the First Christian Church Building Fund 405 N. Adelaide St. Terrell, Tx 75160.

Harold (Sonny) Finley Leigh passed away peacefully surrounded by his family April 29, 2019 in Dallas. Sonny was born Dec. 26, 1936 in Nevada, Missouri to Ada Constance Reynolds and Harold Leigh. Sonny was welcomed into Heaven by so many family... View Obituary & Service Information

The family of Harold "Sonny" Leigh created this Life Tributes page to make it easy to share your memories.

Send flowers to the Leigh family.