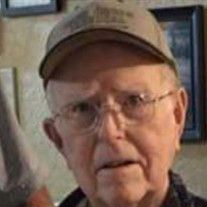 Harold David Wilkerson passed away peacefully March 27, 2019 with family at his side. He was born September 22, 1940 in Rockwall, Tx to Joe and Edith (Richardson) Wilkerson, both of whom preceded him in death along with his beloved wife, Sarah Bryant Wilkerson, and two brothers. Neal Curtis Wilkerson and Robert Wilkerson. Harold was raised and grew up in Rockwall. After marrying the love of his life Sarah in 1960, he enlisted in the US Marine Corps and they were stationed in California and Harold served his country honorably and with distinction during the Vietnam War. After his honorable discharge in 1964, they moved to Terrell where their son, David Joe, was born. Harold drove a truck for various companies and also worked at Walt’s Auto Supply in Terrell. After Harold and Sarah both retired, they both wanted to travel the US and they decided to invest their retirement funds into a truck for their co-owned and operated transport company. Together, they were contracted to transport many items all over the country, most notably the “Goddess of Liberty”, which was the statue that was the ‘crown’ of the Texas Capitol Building. This enabled many Texans and visitors to see a meaningful piece of Texas history that otherwise would not have been seen by so many. The pride Harold took in escorting the Goddess of Liberty over this great state was mirrored in visitors’ eyes as each person recognized the greatness of our state, Texas. Harold also loved travelling all over the nation with Sarah at his side and, together, they had stories and pictures to bring back to their family and friends about the wonderful nation we live in. He was a former member of the Kaufman county REACT CB Club and was a proud sponsor of the Terrell Rodeo Club where his fun personality endeared many people over the airwaves and in arenas, many of whom became lifelong friends. Nothing could keep Harold from watching his son, David Joe, and his grandchildren ride horses and he made sure to rearrange his schedule to see them ride anytime in competitions and rodeos. He, and his signature caps that he always wore, were a staple at area arenas. Harold is survived by his, son, David Joe Wilkerson and wife, Valerie, of Seagoville; daughter, Kristye Palmquist of Forney; four grandchildren: Bradley Wilkerson and wife Mandy, Justin Wilkerson and wife Stephanie, Ashlie Palmquist, Ryan Palmquist; great grandchildren: Karley Wilkerson, Bryanna Wilkerson, Brenden Wilkerson, Gavin Wilkerson, Garrett Wilkerson and Megan Wilkerson; sisters: Joann Worley, Winnie Branam and Doris Mauldin as well as numerous nieces, nephews, and other relatives and a host of friends. Funeral service will be 2:30 pm Saturday March 30, 2019 at Max Slayton Funerals and Cremations interment will follow at Weaver Cemetery with military honors. Family will receive friends 6 pm to 8 pm Friday March 29 at Max Slayton Funerals and Cremations. Memorials may be made in honor of Harold to TN Hope Foundation, 8210 W. State Rd 84, Davie, FL, 33324.

Harold David Wilkerson passed away peacefully March 27, 2019 with family at his side. He was born September 22, 1940 in Rockwall, Tx to Joe and Edith (Richardson) Wilkerson, both of whom preceded him in death along with his beloved wife, Sarah... View Obituary & Service Information

The family of Harold David Wilkerson created this Life Tributes page to make it easy to share your memories.

Send flowers to the Wilkerson family.