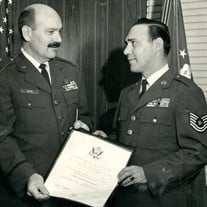 Harry Manuel Campbell, 91, of Mesquite passed away on April 14, 2019 with his loving wife and family by his side. Harry was born on January 28, 1928 in Brownsville, Texas. to James P. Campbell and Amelia (Garcia) Campbell both of whom preceded him in death, along with his daughter, Linda Brock and son-in-law, Richard Brock Harry served in the United States Military with honor and distinction in both the US Army and the US Air Force. His deployments and placements were during WWII, Korea and Vietnam. Harry was an officer and a gentleman and his reputation for leading by example was unparalleled. The men and women who served with him during his various assignments came to regard him with the utmost respect for the honor and integrity that he brought to each organizational group. After retiring from the military, Harry embarked on his professional career and he started Double M Extermination in Dallas, Tx. He owned and operated the business for almost 25 years where, again, his commitment to excellence to every customer garnered him a professional reputation that was highly coveted by his competitors. About 15 years ago, Harry accepted Jesus Christ as his personal savior, and he began another chapter in his life to make the Lord known to all he met. He was a faithful member of Dallas Pentecostal Church and his heart for serving the Lord and others became a hallmark of Harry’s personality. With all the times that Harry so selflessly gave of himself-to his country, his customers and his church-Harry gave his everything to the love of his life, Doris, affectionately known as Dot. He and Dot had a love story for the ages and the devotion he felt towards her was one of the very first things people noticed about Harry. He believed that each day was a new chance to show his beloved Dot how much he loved and adored her and that he would do everything in his power to care for her every need. This devotion that Harry and Dot gave each other in their 47 years together would shape their childrens’ own ideals of love as part of a wonderful marriage. Harry knew that this unconditional love between he and Dot also mirrored the all-encompassing love that the Heavenly Father has for each of us. A man of principle, virtue, truthfulness, compassion and steadfast loyalty, Harry will be missed by all who knew him. Harry leaves to carry on his legacy his faithful wife of 47 years wife, Doris (Dot) Campbell of Mesquite; daughters: Gloria Garcia and husband, Rudy, of College Station, TX, Hope Hamro and partner Renee Harrison of Wills Point; sons: Steve Lambeth and wife Trish, of Mesquite, TX, Randy Lambeth and wife Shelia of Scurry, TX; grandchildren: Michael Lambeth, Stephannie Lambeth, Rachel Kircher, Tonya Kresta, Kaleb Lambeth, Doogie Hamro, Darcie Hamro, Okie Hamro, Dana Brock, Ryan Garcia; 12 great grandchildren as well numerous extended family, loving church family and a host of friends and colleagues. A Celebration of Life will be 3:00 pm, Friday, April 19, 2019, at Dallas Pentecostal Church, 8126 Suetelle Dr. Dallas, Tx 75217. Stories, memories and pictures of Harry may be shared here on his memorial site.

Harry Manuel Campbell, 91, of Mesquite passed away on April 14, 2019 with his loving wife and family by his side. Harry was born on January 28, 1928 in Brownsville, Texas. to James P. Campbell and Amelia (Garcia) Campbell both of whom preceded... View Obituary & Service Information

The family of Harry M. Campbell created this Life Tributes page to make it easy to share your memories.

Send flowers to the Campbell family.