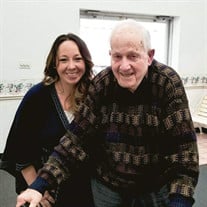 Haskell Paden, lately of Terrell, passed away on July 19, 2019. He was born Jan. 12, 1930 in Brownfield, TX to Walter Franklin and Rosa E. (Jones) Paden. Scripture comforts us with these words: that to be absent from the body is to be present with the Lord. When Haskell opened his eyes in Heaven, he saw his Savior as well as his beloved wife, Mildred June Paden, his parents, his brothers: Glen, Walter, Cleo, Lowell, Edsel, Dennis, Jamie and Cecil and their spouses and a grandson, Scott Paden, all of whom preceded him in death. Haskell worked in concrete construction during and after high school. He attended a couple of years of college until he enlisted and proudly served his country in the Army. On April 7, 1953, Haskell married the love of his life, Mildred, in Lubbock, Texas until her passing in 2007. Their love for each other set the example for their children and to others about how marriage should be the reflection of what Christ felt to the church. Always keeping God at the forefront of their marriage, their home and their family created a lasting legacy of unconditional love that their children are proud to pass on. Haskell had a work ethic that enabled him to be a respected associate in the companies he helped as well as the projects that he assisted with. He was a life long member of the Church of Christ and, since moving to Terrell almost 5 years ago, he was a faithful member of Colquitt Road Church of Christ. A loving man who lived a life to bring honor and glory to God, Haskell will be missed by all who knew him. He leaves to cherish his memory his children: Haskell Franklin Paden of Spring, TX, Cindi Paden Lewis of The Colony, TX, Jay Paden of Jewett, TX, Terry Paden of Albuquerque, NM, Beverly Paden Hogan of Terrell, and Jennifer Kay Rowden of Dallas, TX and he was a treasured Papaw to 18 grandchildren, 19 great grandchildren and 2 great-great grandchildren as well as numerous nieces, nephews, extended family and friends who loved him greatly. Memorial service for Haskell Paden will be 11 am Saturday July 27, 2019 at Webb Chapel Church of Christ 13425 Webb Chapel Rd. Dallas, Tx 75234. For those wishing, memorials may be made to Wounded Warrior Project www.woundedwarriorproject.org

Haskell Paden, lately of Terrell, passed away on July 19, 2019. He was born Jan. 12, 1930 in Brownfield, TX to Walter Franklin and Rosa E. (Jones) Paden. Scripture comforts us with these words: that to be absent from the body is to be present... View Obituary & Service Information

The family of Haskell Paden created this Life Tributes page to make it easy to share your memories.

Send flowers to the Paden family.