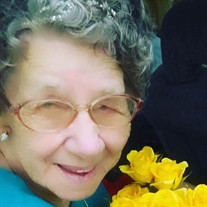 Helen Wooldridge Wallace, 97, after a brief illness died peacefully at home on Sunday, 11-28-2021, where she was surrounded by a multitude of her family and friends. The daughter of Frank and Maggie Hennig, she was born 09-10-1924 in Rowlett, Texas where she lived and attended school. Helen married Thomas O. (Joe Frank) Wooldridge in 1946 and moved with him to Royse City, Texas where they farmed, raised cattle, as well as other livestock, and their family. In 1961 she began working in Garland, Texas for Varo, Inc. in quality control. She was promoted to their semi-conductor division where she worked as a line lead until moving up to production control coordinator. She retired from Varo in 1984 and leased a booth at Tawakoni Tradesday where she sold a variety of new and gently used products. She also sold Avon products for several years where she quickly advanced to Presidents' Club status for her salesmanship abilities. In January of 1981 she was widowed when Joe Frank died of a sudden heart attack. Helen was subsequently married to Joseph (Joe) Wallace of Dallas, Texas. Joe and Helen were members of VFW Post 1837 in Dallas, Texas where Joe was Quartermaster and Helen was President of the Ladies Auxiliary. They enjoyed dancing and participating in many of the activities offered by the VFW. In January of 1996 Helen was widowed once again when Joe died of a stroke. Helen was an avid Texas Rangers fan. She rarely missed a game and could tell you details of her favorite players lives on and off the field. She enjoyed spending time with her numerous friends, children, grandchildren, great-grandchildren, and great-great grandchildren, especially on holidays and on family vacations to the beach. She was dearly loved and will be greatly missed. She is survived by two of her five children, Alma Joyce Wooldridge of Terrell, Texas and Martha (Marty) Shaw along with Marty's husband, Gary Shaw, of Royse City, Texas, one sister-in-law, Shirley Hennig, of Dallas, Texas, two sons-in-law, Jim Helm of Kaufman, Texas and Tom Knipstein of Royse City, Texas, and one daughter-in-law, Kathy Wooldridge of Rockwall, Texas, four grandsons: Jeff Carson and his wife, Charlotte, of West Tawakoni, Texas; Matt Carson and his wife, Laura, of Frisco, Texas; Danny Thompson and his wife, Cecelia, of Royse City, Texas; and Eddy Wooldridge and his wife, Sarah, of Lake Fork, Texas, five granddaughters: Staci Poteet of Terrell, Texas; Lisa Beasley and her husband, Blake, of Midland, Georgia; Hannah Pagaza and her husband, Edgar, of Union Valley, Texas; Rebecca White-Shaw and her wife, Malory, of Terrell, Texas; and Rachel Shaw of Canton, Texas. Helen was also blessed with four great grandsons, six great granddaughters, three great-great grandsons, including a set of twins, and two great-great granddaughters. She was preceded in death by her parents, Frank and Maggie Hennig of Rowlett, Texas, her brother, Franklin Hennig, and his wife, Ruby, of Rowlett, Texas, her brother Barney Hennig and his wife, June, of Rowlett, Texas, her brother, James Hennig, and his wife, Dorothy, of St. Jo, Missouri, her sister, Janet Cave and her husband, Bill, of McKinney, Texas, her daughter, Delores Helm, of Kaufman, Texas, her son, Tommy Joe Wooldridge, of Royse City, Texas, and her daughter, Rita Knipstein, of Royse City, Texas. Visitation will be Sunday afternoon, December 5, 2021, from 3:00 to 5:00 p.m. and the funeral will be Monday morning, December 6, 2021, at 11:00 a.m. at Max Slayton Funeral Chapel 642 N. Rockwall Ave. Terrell, Tx 7560 with interment to follow at Chisholm Cemetery. Pallbearers will be grandsons Jeff Carson, Matt Carson, Danny Thompson, Eddy Wooldridge, Blake Beasley, and Edgar Pagaza. T

Helen Wooldridge Wallace, 97, after a brief illness died peacefully at home on Sunday, 11-28-2021, where she was surrounded by a multitude of her family and friends. The daughter of Frank and Maggie Hennig, she was born 09-10-1924 in Rowlett,... View Obituary & Service Information

The family of Helen Wooldridge Wallace created this Life Tributes page to make it easy to share your memories.

Send flowers to the Wallace family.