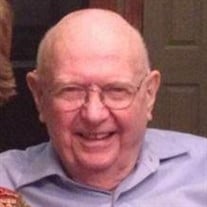 Dr. Horace Perry Flatt passed away peacefully on November 22, 2021 in Dallas, Texas. He was born in Wichita Falls, Texas, on August 28, 1930, to John Horace Flatt and Myrtie Mae Johnson Flatt, the second of their three children. He attended the public schools of Terrell, Texas, graduating as valedictorian of his class. Subsequently, he attended Rice Institute (now Rice University) where he received a bachelor's degree in physics, as well as masters and doctorate degrees in mathematics. Dr. Flatt served in the United States Army, 1954-1956, where he began a career in digital computers and their application to the solution of scientific problems. He lived in California for much of his professional career where he headed a research and development laboratory. He was particularly proud of his personal work on a design team for the first university-wide computer network. He retired as manager of IBM's U.S. Scientific Centers at the end of 1991, returning to his hometown of Terrell. In addition to a number of professional publications in mathematics, physics, and computer science, Dr. Flatt was the author of six books on the history of Peruvian coins, a subject on which he was a noted authority. His interests in local history are reflected in his books on the history of Kaufman County and of the City of Terrell. He was active as an elder in the First Presbyterian Church of Terrell and as president of the Oakland Memorial Park Association for many years. Dr. Flatt also served on various civic and university boards where his insight and knowledge were respected by all who served alongside him. He is preceded in death by his parents, along with his first wife, Eleanor Jutzi Flatt; his sister, Patsy John Flatt Rickman and her husband, Jesse Crawford Rickman; brother, Douglas Evans Flatt and step-daughter, Janice Ponder. He is survived by his wife, Jean Ann Ables-Flatt; a son, James Horace Flatt and his wife, Jody Reed Flatt and their daughter, Rachael Elizabeth Flatt and her husband Eric Iwashita; a daughter Ann Carol Flatt and her children, Mitchell Perry Hudson and Daryl Hudson; sister-in-law Maxine Flatt; nephews: Jess C. Rickman Ill, John Rickman, and Darrell Flatt; nieces, Missy Suman and Marilyn Taylor; his stepchildren: Vikki Ponder Phy, Michelle Ponder Porter, Debra Ponder Miller, Pamela Ponder Hooser and Tom Ponder as well as numerous cousins, extended family and many friends. Memorial service will be at 12:00pm, Saturday, Dec. 4, 2021 at First Presbyterian Church, 834 Griffith, Terrell, TX. Interment will be at 10:00am preceding the church service. Dr. Flatt's family will receive friends 6:00pm to 8:00pm, Friday, December 3, 2021 at Max Slayton Funeral Chapel. In lieu of flowers, donations may be made to the First Presbyterian Church of Terrell, 834 Griffith, Terrell, 75160 or to the Oakland Memorial Park Association, 110 N. Catherine, Terrell, 75160 , or another charitable organization.

Dr. Horace Perry Flatt passed away peacefully on November 22, 2021 in Dallas, Texas. He was born in Wichita Falls, Texas, on August 28, 1930, to John Horace Flatt and Myrtie Mae Johnson Flatt, the second of their three children. He attended... View Obituary & Service Information

The family of Dr. Horace Perry Flatt created this Life Tributes page to make it easy to share your memories.

Send flowers to the Flatt family.