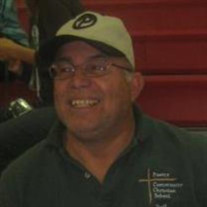 Hubert Thompson, Jr., of Terrell, passed away on March 16, 2020 in Arlington with family by his side. Hubert was born Aug. 21, 1954 in Bartlesville, OK to Hubert, Sr. and Yolanda Thompson. He was preceded in death by his father and his brother, Fred Thompson. Hubert was a 1973 graduate of Sparks High School in Sparks, NV where he was on the wrestling team. He served honorably with the US Navy and was a proud veteran. He enjoyed hunting, especially deer, and being in the outdoors was a favorite pastime. His favorite activity was to get the chance to watch his kids and grandkids play sports and he was their biggest fan in every activity they participated in. He also coach soccer and had a great time getting to know the players and helping them develop their talent. Hubert’s generous heart and personality made him just like a brother to the many people he knew and met. His kindness was well known and he was the first to step in and help anyone who had a need. His bright smile made everyone he met an instant friend and he will be greatly missed by all who knew him. Hubert is survived by his wife, Janie Mariscal of Terrell; son: James; daughter, Yomar and “Dee”; daughter, Danielle and Adolfo; grandchildren: Elicia, Xavier, Ysabel, Arius, Cecilia, and Nayeli; mother, Yolanda Thompson; brother, Leo Thompson; sister, Marie Thompson Olveda; as well as several nieces, nephews, extended family and a host of friends. A Gathering of friends and family will be held 5:00 pm to 8:00 pm, Friday, March 20, 2020, at Max Slayton Funerals and Cremations. Due to current conditions specified by the CDC, funeral home staff will allow 50 people at one time in the building for the Gathering. In lieu of flowers, the family requests memorials be made to Hunting With Soldiers www.huntingwithsoldiers.org

Hubert Thompson, Jr., of Terrell, passed away on March 16, 2020 in Arlington with family by his side. Hubert was born Aug. 21, 1954 in Bartlesville, OK to Hubert, Sr. and Yolanda Thompson. He was preceded in death by his father and his brother,... View Obituary & Service Information

The family of Hubert Thompson created this Life Tributes page to make it easy to share your memories.

Send flowers to the Thompson family.