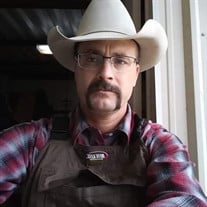 Jack Don Proctor, Jr. of Terrell, passed away November 20, 2018. Jack was born March 27, 1974 in Rockwall, TX to Jack Proctor, Sr. and Florence (Sissy) Anderson. Jack was met in Heaven by his nephew, Coby Bostick, and his grandparents: Joyce and George Proctor, Albert Anderson, Yvonne Penn and Rufus and Katherine Nalls. “Bubba” never met a stranger and his outgoing personality made him an instant friend to all who met him. He loved to learn about people and their life stories and Bubba would talk to anyone. He was always the first willing to help and his generosity was very well known. He was compassionate and his heart was as big as the homeplace ranch that he loved working on. His smile made everyone feel instantly comfortable and his positive outlook helped raise others’ spirits. He truly loved to be outdoors and he would often be found fishing, hunting and enjoying time outside with family and friends. Jack is survived by his wife, Amy Proctor of Kaufman; step-children: Chris Tidmore, Cody Vasquez, Casey Vasquez; Parents, Sissy and Fred Nalls, of Terrell; Jack Proctor, Sr. of Terrell; brother, Mark Nalls of Terrell; sisters: Donna Tomerlin and Marc, Marcia Bostick, Stacie Nalls and Sanjar and Angela McKinney; special aunt, Pam Porter of Carrollton as well as numerous nieces, nephews and a host of family and friends including special friends Wendell Melton and Kristi Lile. Funeral service for Jack will be 4 pm Sunday November 25, 201 8 at Max Slayton Funerals and Cremations. Family will receive friends at 3 pm Sunday November 25 one hour prior to service. For those wishing to honor Jack and his love for helping others, donations may be made to the Terrell State Hospital Volunteer Council, PO Box 70, Terrell, 75160 or at www.tshvolunteercouncil.org.

The family of Jack Don Proctor Jr. created this Life Tributes page to make it easy to share your memories.

Send flowers to the Proctor family.