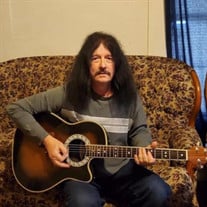 Jackie Rickman, lifetime resident of Terrell, passed away peacefully on July 10, 2020 at his home. Jackie was born Feb. 21, 1959 in Terrell to John Luther, Jr. and Gladis (Ramey) Rickman, both of whom preceded him in death along with his sisters: Linda and Laura Rickman. Jackie was a 1977 Terrell HS graduate where his sense of humor was known to the entire school. He loved music and playing music and his talents were as well known as his smile. Jackie was the co-founder of the Latter Reign band where his creativity and originality were hallmarks of their music. His passion for being a musician was easily seen and he was happy to share this excitement with all who knew him. He was a dedicated and respected employee of Terrell State Hospital and was a true asset to everyone he worked with. Jackie was raised in Emmanuel Baptist Church where his faith was given a firm foundation. His current membership at LifePointe Church was a true blessing to him and the many friends he made with his servant’s heart. He enjoyed spending time with his kids and grandkids and Jackie will be missed by all who knew him. Jackie is survived by his loving wife, whom he married on January 20, 2019, Patty Reed; son, Josh Canary and wife Alishia; brothers: John Rickman and wife, Margaret, James Rickman and wife, Tracy, Gary Rickman and Leslie Rickman; grandchildren: Claire, Hayden, Sarah, Johnny and Randy as well as several other nieces, nephews, extended family and a host of friends. Funeral service will be at 3:00pm, Sunday, July 12, 2020 at LifePointe Church in Terrell with interment to follow at College Mound Cemetery. The family will receive friends beginning at 2:00pm to service time at LifePointe Church. For those wishing, memorials in Jackie’s honor may be made to LifePointe Church, 1600 Griffith Ave, Terrell, TX, 75160.

Jackie Rickman, lifetime resident of Terrell, passed away peacefully on July 10, 2020 at his home. Jackie was born Feb. 21, 1959 in Terrell to John Luther, Jr. and Gladis (Ramey) Rickman, both of whom preceded him in death along with his sisters:... View Obituary & Service Information

The family of Jackie Rickman created this Life Tributes page to make it easy to share your memories.

Send flowers to the Rickman family.