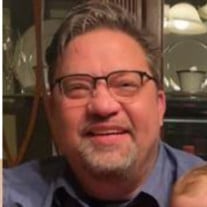 ***Due to restriction of floral tributes at D/FW National Cemetery, please see memorial information below*** James Edward Calvery, of Terrell, passed away on Jan. 3, 2022. James was born Jan. 17, 1974, in Tyler, TX to Steve and Greta Calvery. He was met in Heaven by his father, Steve, and his father-in-law, Tom High. James was a proud veteran having served in the Army. He married his high school sweetheart, best friend, and soulmate, Kim High, on Aug. 15, 1991, in Rockwall, and 5 days later, was called into the Army, serving with honor and distinction. Growing up, James had an innate talent for working on machines of every size and complexity - a skill that served him well in his military career as he worked as an Apache Helicopter Crew Chief. His vast knowledge and quick understanding of taking apart, rebuilding and repairing the infamous armed Apache helicopter helped ensure the success of each helicopter’s primary role of being an attack aircraft. During his enlistment, James was stationed in Kentucky, Virginia, and Fulda and Illesheim in Germany and had completed the NCO Officer Training Program and, upon his honorable discharge, had achieved the rank of Specialist. He then served in the Reserves due to his award of the Green to Gold Scholarship, where he was to be commissioned upon graduation and return to Active Duty as an Aviation Officer. However, due to a motorcycle accident which cause multiple extensive injuries, he decided to pursue a new career as a coach and educator in Brenham, TX, impacting many students’ lives and learning. He and Kim worked together in the First Baptist Church youth group, as James loved to share his faith and continue to build relationships to impact young people. After their son, Christopher, graduated high school and moved to college, the couple moved back to Terrell. In his spare time, there was nothing James loved more than spending time with family, especially his beloved granddaughters and his cherished nieces and nephews. He also enjoyed building and racing RC cars, home improvement projects and how to make all things just “work better!" James also had a deep appreciation for the great outdoors where he and his family made many memories. Along with his dedication to his loved ones, James’s big heart in helping others any time they needed it was a true hallmark of his personality and, now, his legacy. A wonderful man with an unforgettable laugh, James will be missed by all who knew and loved him. James is survived by his wife, Kim Calvery of Terrell; son, Christopher Calvery of Terrell; mother, Greta Calvery of Bryan, TX; sister, Ashley Burrows and husband, John, of Pearland, TX; brother, Scott Calvery and wife, Rachel, of Wills Point, TX; granddaughters, Katie and Emily Calvery; nieces and nephews: Jadyn, Jayce, Guyton, Bellami and Alexander; brother-in-law, Chris High and wife, Elise, of Richardson; mother-in-law, Linda Norton and husband, Tom, of Terrell, as well as many other extended family and a host of friends. Graveside service will be at 10:15am, Monday, Jan. 17, 2022 at Dallas/Ft. Worth National Cemetery with the procession lining up in LANE TWO (no earlier than 10:00am-lining up earlier than 10am will place you in a different funeral service) Due to the cemetery limitations on floral tributes, the family strongly suggests donations in James’ name to be made to: Patriot Paws at www.patriotpaws.org, Wounded Warrior Project at www.woundedwarriorproject.org or Disabled American Veterans at www.dav.org.

***Due to restriction of floral tributes at D/FW National Cemetery, please see memorial information below*** James Edward Calvery, of Terrell, passed away on Jan. 3, 2022. James was born Jan. 17, 1974, in Tyler, TX to Steve and Greta Calvery.... View Obituary & Service Information

The family of James Edward Calvery created this Life Tributes page to make it easy to share your memories.

***Due to restriction of floral tributes at D/FW National Cemetery,...

Send flowers to the Calvery family.