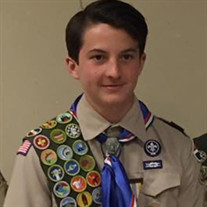 James Thomas Cato, beloved son, brother, grandson, nephew and friend, passed away on September 24, 2018. James was born March 10, 2002 in Dallas to parents, Todd and Julie Cato, and making a big brother of Daniel. He was welcomed into Heaven by his Savior as well as his grandfathers, Thomas O. Church and James “Jimmy” Cato. James was a junior at Poetry Community Christian School where his personality made instant friends of all who met him. He had an innate talent for seeing the best in people as well as the best in every situation and so many were immediately drawn to the positive feelings he so easily displayed. The initiative James had for accomplishing tasks could be seen in his continual reaching for goals he set for himself. He was an Eagle Scout and was an active member of Troop 332 in Kaufman, he achieved receiving his Red Belt (one level below Black Belt) in his Christian Soldier Karate group and was a vital member of the PCCS basketball team. James not only had high aspirations for physical goals but he also had a love of learning and academics demonstrated by his membership in the National Honor Society with James’ teachers also recognizing his diligence to his studies. He was an active member at St. Ann’s Catholic church and loved being a part of the independent theatrical troupe, “The Vagabond Players” where, true to his awesome personality, James helped wherever and whenever he could with productions. His love of people and their stories and histories led him to his first job at Wal-Mart in Kaufman. Being a cashier made James so happy in that he could, and would, share his positivity with other employees and customers. No one ever left a conversation with James without laughing or smiling and he will be greatly missed until we meet him again. James embodied the quote from Aesop, “No act of kindness, no matter how small, is ever wasted” and his legacy of kindness will be carried on in every person whose lives he touched. James is survived by his parents, Todd and Julie Cato, of Scurry; brother, Daniel Cato of Scurry; maternal grandmother, Clara Church; paternal grandmother, Diana Cato; aunts and uncles: Craig Cato, Mary Ellevold, Anne and Jeff Freye, Tom Church and Joanne Young, Tony and Dawn Church, Joe and Tina Church, Jeanne and Jerry Wagner, Liz Church, and Erin Green; his much loved cousins and his dog, who was his constant buddy, Oreo as well as other extended family and a host of friends who loved him and will miss him dearly. Funeral Mass for James will be held at 11:00 am on Monday, October 1, 2018 at St. Ann Catholic Church in Kaufman with interment to follow at Kaufman Cemetery. James' family will receive friends from 5:00 pm to 7:00 pm with Recitation of the Holy Rosary beginning at 7:00 pm on Sunday, September 30, 2018 at St. Ann Catholic Church. In lieu of flowers, his family asks that contributions be made to the James Cato Scholarship Fund, c/o St. Ann’s Catholic Church, 806 Washington, Kaufman, 75142 or to PCCS Basketball Scholarship Fund, 18688 FM 986, Texrrell, 75160.

James Thomas Cato, beloved son, brother, grandson, nephew and friend, passed away on September 24, 2018. James was born March 10, 2002 in Dallas to parents, Todd and Julie Cato, and making a big brother of Daniel. He was welcomed into Heaven... View Obituary & Service Information

The family of James Thomas Cato created this Life Tributes page to make it easy to share your memories.

Send flowers to the Cato family.