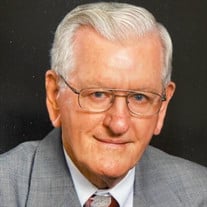 ***SERVICE WILL BE LIVESTREAMED ON FUNERAL HOME WEBSITE*** ***The family also requests that masks be worn during visitation and the funeral. *** James F. Crouch, 98, of Terrell, Texas passed away peacefully on January 28, 2022 with his family by his side. He was born on December 20, 1923 to the late T. Vane and Trudie Causbie Crouch in the College Mound Community of Kaufman County, Texas. He was joyfully met in Heaven by his parents; his beloved wife, Evalyn; his brothers, Perry Bruce Crouch and Taylor Crouch, and his sister, Charlotte Crouch Ward. James was a 1942 graduate of Wills Point High School and proudly served in the U.S. Army from 1943 to 1946. He began his training in Ft. Lewis, Washington and Camp Bowie, Texas. He served as a message center courier for the 65th Signal Battalion during WWII in England, France, Germany, and Austria. Later, he served 10 months in Germany in the Army of Occupation. Upon his discharge, he met Evalyn Henderson at a church service at First Baptist Terrell, and he knew that very day he was going to marry that beautiful young lady. James and Evalyn married on October 24, 1947. He attended Texas Military College in Terrell before being employed as a salesman for six years for the Curtiss Candy Company. James was then employed as an agent for the National Life and Accident Insurance Company for 26 years where he worked hard and qualified for 14 leadership trips. After retiring in 1979, he served as Director of the Adult Probation Department of the 86th District Court of Kaufman County for another 19 years. He then, at age 74, became a bailiff for the 86th District Court for five years. In his personal life, he was a deacon at First Baptist Church in Terrell and also served as a volunteer fireman for 30 years. James was also honored to serve as vice-chairman in the construction of the Kaufman County Veterans Memorial Park. He will be remembered for his love of God, family, and his country. He had many, many friends and was great at keeping the communication lines open with them. He preferred reaching out with phone calls or handwritten letters and had little use for technology. To the end, he was sharp minded and always thinking of others. He is survived by his sons Keith Crouch and wife Sarah, of Midlothian, TX, Paul Crouch and wife Phyllis of Tyler, TX; granddaughters: Ashley Allen (Daniel) of Celina, TX, Mary Dorn (Scott) of Dallas, TX, Holly Morrison (Matt) of McKinney, TX, and Amy Irvin (Jeremy) of Arlington, TX; great grandchildren: Kaley Allen, Caleb Morrison, Avery Allen, Noah Morrison, Natalie Irvin, Abigail Irvin and Reese Kirkham-Dorn, along with numerous nieces, nephews, other extended family, and countless friends. Funeral service will be at 11:00am, Saturday, Feb. 5, 2022 at First Baptist Church in Terrell. Interment will be at 10:00am, Tuesday, Feb 8, 2022 at Oakland Memorial Park. His family will receive friends beginning at 10:00am until service time at the church. The Crouch family would like to thank the staff of Colonial Lodge Assisted Living and Alinea Family Hospice Care of Terrell for all of the love and care shown to James over the last few years, In lieu of flowers, Mr. Crouch's family is strongly suggesting memorial donations may be made to: Crouch Family Endowed Scholarship Fund at DBU: Dallas Baptist University, 3000 Mountain Creek Pkwy, Dallas, TX 75221-9299, or to FBC Terrell, specifically for the building program.

***SERVICE WILL BE LIVESTREAMED ON FUNERAL HOME WEBSITE*** ***The family also requests that masks be worn during visitation and the funeral. *** James F. Crouch, 98, of Terrell, Texas passed away peacefully on January 28, 2022 with his family... View Obituary & Service Information

The family of James Crouch created this Life Tributes page to make it easy to share your memories.

***SERVICE WILL BE LIVESTREAMED ON FUNERAL HOME WEBSITE***
***The...

Send flowers to the Crouch family.