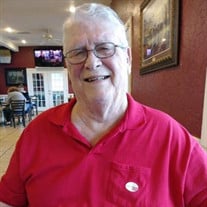 James (Jim) Frank Daily, of Forney, went to be with the Lord January 27, 2021. He was born October 9, 1943 in Hillsboro, TX to the late Wallace Marvin “Shorty” and Lucy Taylor Daily. He was preceded in death by his parents and siblings: Marvin Daily and wife Clara, Kathleen Schmidt and Dorothy Anderson. Jim was a proud veteran of the U.S. Coast Guard having enlisted to honorably serve his country. He attended UT Arlington and received his bachelor’s degree in business administration which equipped him to help start several businesses with a firm foundation in successful profit and asset management. He also worked in the steel business, specifically manufacturing oil field pipe. Jim worked for, and later managed, Intercontinental Pipe and Steel in Forney, where his knowledge base in business administration helped the company enterprises grow and thrive. After semi-retiring from the corporate world, he worked for the U.S. Postal Service, having his “final” retirement in 2005. He met and married the love of his life Martha Jo Pickard in Zavalla, TX on December 31, 1966. Jim had a passion for cooking and passed this love down to his sons, both of whom won several BBQ competitions. He could make or build anything with his hands and also was known as “Shoot It All” for his shooting craps ability which he would gladly teach anyone. A man of many talents, insightful wisdom and fun humor, Jim will be missed greatly by all who knew and loved him. He is survived by his wife Martha Daily of Forney; sons: Jay Patrick Daily of Tampa, FL, Jon Shannon Daily and his wife Larissa of Forney, TX, siblings: Diane Pritchett and her husband Dale of Conroe, TX, Larry Daily and his wife, Terri of Spring, TX., and Gerald Daily and his wife, Sandra of Itasca, TX; brother-in-law, James Anderson and three grand children Conner, Katelyn and Madelyn. A private service will be 10 am Friday February 12, 2021 at DFW National Cemetery. Family requests in lieu of flowers, memorials be made to Wounded Warriors Project or a church of your choosing to honor Jim’s generous heart.

The family of James Frank Daily created this Life Tributes page to make it easy to share your memories.

James (Jim) Frank Daily, of Forney, went to be with the Lord...

Send flowers to the Daily family.