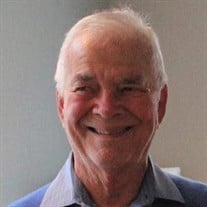 James Billy Hale, 86, passed away peacefully on December 19, 2021.Jim was born in Booneville, Missouri on February 11, 1935. Jim graduated from Northeast High School in Kansas City, MO in 1953. He was a draftsman for Bendix Corporation before moving to Huntsville, AL in 1965. There he worked as a draftsman for Brown Engineering and Sperry Rand. In 1973, Jim made a career change to become a sales rep for Kemp Instruments. He married his high school sweetheart, Evelyn Lutgen Hale on March 3, 1956. They were blessed to celebrate 65 years of marriage together. Jim and Evelyn raised their three children, Jim, Jennifer, and Bryon in Huntsville, AL. In 1977, Jim and Evelyn moved to Atlanta, GA to open an office for Kemp Instruments. They moved to Dallas, TX with Kemp Instruments in 1990. Jim retired as President of Kemp Instruments in 2000. Jim was a Christian and loving husband, father, grandfather and brother. He had a never-ending positive attitude; even when he and his sisters had polio. He said often, you will never work a day in your life if you love what you do. He enjoyed gardening, baseball, and being with his family. Jim was preceded in death by his wife, Evelyn Hale, sister, Janice Watts Due and mother, Genieve Watts. He is survived by his children: James Michael Hale (Mary Ann) Jennifer Hale Macie (Dana), and Bryon Patrick Hale (Paige), sister and brother-in-law Nancy and Craig Canatsey, nine grandchildren, eight great grandchildren and numerous cousins, nieces, and nephews. A service of remembrance will be held on Friday, January 14, 2022 at 2:00pm at Rockwall First United Methodist Church, 1200 E. Yellowjacket Lane, Rockwall, Texas, 75087 with The Reverend Joe Pool presiding.

James Billy Hale, 86, passed away peacefully on December 19, 2021.Jim was born in Booneville, Missouri on February 11, 1935. Jim graduated from Northeast High School in Kansas City, MO in 1953. He was a draftsman for Bendix Corporation before... View Obituary & Service Information

The family of James (Jim) Billy Hale created this Life Tributes page to make it easy to share your memories.

Send flowers to the Hale family.