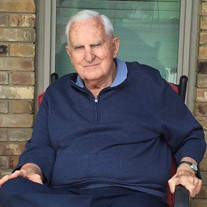 James Walter McCuiston, Jr., longtime and well-known resident of Forney, passed away April 22, 2020. Jim was born September 1, 1928 in Spring City, Tenn. To James w., Sr., and Sydnah (Thompson) McCuiston, both of whom preceded him in death along with his beloved wife, Oleta McCuiston, their sons, James McCuiston and Michael McCuiston, and his brothers, Bob McCuiston and Bill McCuiston. Jim grew up and was raised all over Tennessee and he moved to Dallas in 1950. In the spring of that year, he went on a blind date with a beautiful young lady named Oleta Marilyn Johnson. They were inseparable from that day on and on October 28, 1950, they were married and together they raised a wonderful family filled with love and faith for the next 62 years until Oleta’s passing on July 5, 2012. In 1945, Jim enlisted into the US Navy where he served with honor and distinction during WWII as well as his entire naval career until his retirement in 1969 having attained the rank of Chief Petty Officer. After retirement from the Navy, Jim worked Fleet Control Manager with Hayes Leasing Co. in Dallas. In 1983, Jim and his family moved to Forney where they established deep roots in the growing community. Jim and Oleta both were active and faithful members of First Baptist Church of Forney where he also served as Deacon. He also held other memberships with the American Legion Post 0591 and the First Baptist Church Forney Bass Club which enabled others to see his steadfast character with his unique sense of wit and intelligent insight. He was a generous man to a fault and many times Jim’s generosity was given freely to all who needed help. His close relationship with his Savior led the many decisions Jim made in his life and his kindness, generosity, commitment, and unconditional love to all he met were modeled after the teachings of Jesus. A great man both in word and deed, Jim will be greatly missed by all who knew him and we, his family, take comfort that he is reunited with Oleta until we all can be together again. Jim is survived by daughter, Lisa Cowgill and husband, Keith, of Forney; sister, Wanda Ozias, of Cincinnati, OH; granddaughters: Emily McCuiston of Sacramento, CA, Tracy Johnson and husband, Robert, of Alameda, CA, Haley McCuiston-Zirkle and husband Ben of Sugarland, Tx, April Wright and husband, Michael, of Denton, TX, Mallory Sibley and husband, Landon, of Corinth, TX; great granddaughters: Lily Johnson, Allie Wright, Harper Wright, Sadie Sibley, and Avery Sibley as well as numerous nieces and nephews, extended family and a host of friends who will miss him greatly. A private graveside service will be held at Hillcrest Cemetery in Forney with a public Celebration of Jim’s life to be held at a later date at First Baptist Church in Forney. In lieu of flowers, the family suggests that donations be made to the North Texas Food Bank at www.ntfb.org.

James Walter McCuiston, Jr., longtime and well-known resident of Forney, passed away April 22, 2020. Jim was born September 1, 1928 in Spring City, Tenn. To James w., Sr., and Sydnah (Thompson) McCuiston, both of whom preceded him in death... View Obituary & Service Information

The family of James (Jim) Walter McCuiston Jr. created this Life Tributes page to make it easy to share your memories.

Send flowers to the McCuiston family.