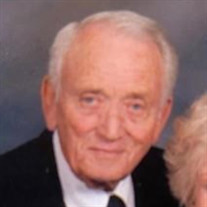 ***The services will be Livestreamed on FBC Terrell Facebook page*** https://www.facebook.com/FBCTerrell/ James Frank Lehew was born October 14, 1937 in Terrell, Texas to Dillon and Marie Lehew. He passed away at 2:44 am on August 22, 2021 with his children holding his hands and delivering him into the arms of Jesus. He fought a very courageous battle with COPD and emphysema for several years and fought very hard against covid and pneumonia that wreaked havoc on his lungs during the last days of his life. All of this was compounded when he lost his beloved wife Barbara just six days before his own death. He no longer had to worry about what would happen to her and he was peacefully able to let go and join her in Heaven. James attended all twelve years of school in Terrell. He formed many friendships during those years and maintained some of those until his death. He was very athletic and lettered in multiple sports, including football, basketball and baseball, earning many honors for himself and Terrell High School. He received a full baseball scholarship to Oklahoma State University, but opted to attend Texas A&M University, where he joined the Corp of Cadets. He also served in the U.S. Army and the Texas National Guard where he formed more lifelong friendships. On November 1, 1958 James joined the Dallas Fire Department, where he proudly served for 32 years, retiring on September 24, 1990 as a Captain. He loved this career and the firefighters he was blessed to serve with. It was an honor for him to be able to serve the City of Dallas for so many years and to be able to rescue and assist so many citizens and their families. He always worked multiple jobs, including Western Auto and Tex Pack, because providing for his family was his utmost priority. He always put himself last and made sure Barbara, Scott and Nancy had all the things they needed. Upon his retirement, he got to work full-time on his cherished farm in Poetry, Texas where he lived until his death. He put a lot of blood, sweat and tears into the farm and made it a wonderful home for 48 years. In his latter years, he absolutely loved spending time with his grandchildren, Jaid, Zoe, Blythe and Braxton. He especially loved taking them for tractor rides in the pasture and teaching them to drive. He attended many of their sporting and school events and was so proud to watch them grow up. They kept him going these last few years as his health really began to fail. His eyes and face always lit up as soon as one of them entered the room. He was preceded in death by his wife of 57 years, his parents and his step-father Orvel Lee Flanagan. He is survived by his son, James Scott Lehew and his wife Lora and his daughter Nancy Lehew Bourland and her husband Billy Ray. He is also survived by his pride and joy, his four grandchildren: Jaid Elizabeth, Zoe Elizabeth, Blythe Jameson and Braxton Ross. He is also survived by his sister Leta Sue Howell Upshaw as well as a host of other relatives and many good friends. His service, along with his wife Barbara’s service, will be on Saturday, September 11, 2021 at 11:00 am at First Baptist Church in Terrell with interment at Oakland Memorial Park. Visitation for both James and his wife will be from 4:00 pm to 7:00 pm on Friday, September 10, 2021 at Max Slayton Funeral Chapel in Terrell. The family strongly suggests that, in lieu of flowers, donations be made to the Krodle Memorial Foundation, at www.krodlememorialfoundation.org, a foundation that is set up to assist firefighters' families after a Line of Duty Death (LODD) by providing scholarships to the children as well as assist in any way possible by Dallas Firefighter and Rescue or Local 58 Relief Fund 10956 Audelia Road Dallas, Tx 75248.

***The services will be Livestreamed on FBC Terrell Facebook page*** https://www.facebook.com/FBCTerrell/ James Frank Lehew was born October 14, 1937 in Terrell, Texas to Dillon and Marie Lehew. He passed away at 2:44 am on August 22, 2021... View Obituary & Service Information

The family of James Lehew created this Life Tributes page to make it easy to share your memories.

***The services will be Livestreamed on FBC Terrell Facebook...

Send flowers to the Lehew family.