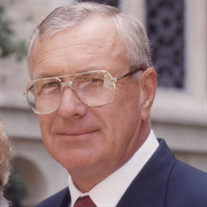 Lt. Col. James O. Richardson, US Army, Retired, of Terrell, passed away peacefully and surrounded by family on the morning of November 16, 2017. He was reunited in Heaven by his wife, Joan Carolyn Richardson, son, James Douglas Richardson, parents, Ottie Lee and Lucille Richardson and sisters: Mary Ann Coltharp and Paula Jane Morris. James was born May 22, 1932 in Dallas to Ottie and Lucille (Weatherford) Richardson. He grew up in the Dallas area and graduated from Mesquite High School in 1949. Because of James’ athletic skills at Mesquite HS, he was able to attend both UT-Arlington and UT-Austin on a basketball scholarship. In 1956 he enlisted and entered into a lifetime commitment with the US Army from which he retired after a commendable career. James served in many military campaigns including tours served in Germany, Korea and two tours in Vietnam. After retiring as Lt. Colonel, James came to Terrell and bought farm land to continue his love of raising livestock, a lifelong interest that he began when he was young. During his high school years, he won many awards and honors at the State Fair of Texas. Never one to stay idle, James and Joan continued their love for husbandry with the purchase and careful caretaking of horses and cattle. A quiet man of great strength and integrity, James leaves a legacy to his family of honor and dedication to all that he held dear. James is survived by his son, John Wright Richardson of Carrollton; daughter, Cheryll Ann Pittera and husband Douglas H., of Fairfield, CT; daughter, Kasey Ann Hanna and husband Thomas A., of Forney; grandchildren: Nicole, Richard and David Pittera, Mimi Richardson, Zachary and Brandon Hanna; brother, John Wayne Richardson and wife, Nita of Garland as well as numerous nieces, nephews, extended family and a host of friends who will miss him greatly. Funeral service will be at 11:00am, Wednesday, November 22, 2017 at Max Slayton Funeral Chapel with interment to follow at 2:30pm at Dallas-Ft. Worth National Cemetery. The family will receive friends 5-7pm, Tuesday, November 21, at Max Slayton Funerals and Cremations. For those wishing, contributions to honor James’ memory may be made to assist St. Jude Research at www.stjude.org.

Lt. Col. James O. Richardson, US Army, Retired, of Terrell, passed away peacefully and surrounded by family on the morning of November 16, 2017. He was reunited in Heaven by his wife, Joan Carolyn Richardson, son, James Douglas Richardson,... View Obituary & Service Information

The family of Lt. Col. James O. Richardson created this Life Tributes page to make it easy to share your memories.

Send flowers to the Richardson family.