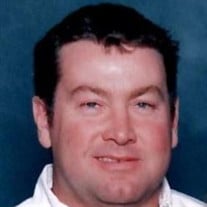 James Robert Wynne, of Poetry, was called into the presence of his Lord and Savior on November 29, 2021. Robert was born on November 29, 1968 in Irving, TX to Jim Bob Wynne and Sue Epperson Wynne. He grew up in Terrell and graduated from Terrell High School in 1987. During Robert’s school years, he created, and cherished, many lifelong friendships. After graduation, he attended college and went to work for Refrigerated Transport Inc., where he worked for many years amongst family and friends. Robert was a member of Rockwall and Brin Church of Christ and an endowed member of Scottish Rite. Robert’s heart for serving the Lord, and others, was readily seen in the many activities that he shared in and supported. Because of his pride and love for Poetry and his family homestead, Robert found blessings in walking many happy and peaceful hours alongside his faithful companion, Bull. When not working on the farm or enjoying long walks, gardening with his Dad had been another of Robert’s treasured joys. Through the collaboration of their clever green thumbs, delicious vegetables were often shared at the family table, frequently accompanied by spirited bantering and Robert’s charming quick wit. There were not many subjects that he did not have an interest in and his well versed knowledge on many, varied topics enabled Robert to be a great conversationalist. As an avid reader, Robert’s most cherished Book, his Bible, could always be found next to his bed, at home on his nightstand. Robert's friendly smile and welcoming personality made an instant friend of all he met. He will be greatly missed but never forgotten. Robert leaves his memory to be cherished by his father, Jim Bob Wynne of Terrell; his mother, Sue Kropp of Irving; and his daughter, Danielle Wynne of Canton. Robert’s ever loving aunt, Joanne Breeden, along with his cousins, Wynne Breeden and David Breeden, and their loving families, will miss him greatly. Robert was a beloved stepdad to Gillian Grace and is also survived by his stepsister, Holly Tripp of McKinney; and, stepbrother, Jason Hargrove of Clearwater, FL. Funeral service for Robert Wynne will be 1:00pm Tuesday December 7, 2021 at Max Slayton Funeral Chapel with interment to follow at Oakland Memorial Park. Family will receive friends Monday December 6, 2021 from 6:00pm to 8:00pm at Max Slayton Funeral Chapel.

James Robert Wynne, of Poetry, was called into the presence of his Lord and Savior on November 29, 2021. Robert was born on November 29, 1968 in Irving, TX to Jim Bob Wynne and Sue Epperson Wynne. He grew up in Terrell and graduated from Terrell... View Obituary & Service Information

The family of James Robert Wynne created this Life Tributes page to make it easy to share your memories.

James Robert Wynne, of Poetry, was called into the presence of...

Send flowers to the Wynne family.