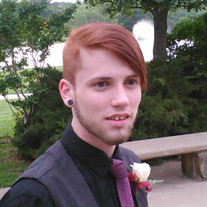 Jeremiah David Trosper, beloved son, brother, nephew, cousin, uncle and friend, passed away on December 3, 2018 in Dallas. Jeremiah was born February 19, 1993 on a military base in Italy to proud parents, Scott and Michelle Trosper and was a beloved older brother to sisters, Bethany and Jessica. He was preceded in death by his grandfather, Donald Brandt. Jeremiah grew up in many places but the majority of his life was spent in the Terrell area. He began his schooling at Terrell Christian Academy after which, he completed his education at Terrell Public Schools graduating from Terrell High School in 2012. He had a remarkable talent as an actor and he truly enjoyed being a part of the Drama Department while at THS. Jeremiah’s ability to immerse himself in the characters of the different plays and musicals was both respected and esteemed by fellow students and teachers. He was also adept at playing the piano and he loved to sing. An avid reader, Jeremiah enjoyed spending time learning all he could about a variety of different subjects that caught his interest. He also loved to travel and spend time with friends and his humor and insightful observations kept so many entertained and informed. Zeus, his devoted four legged best-friend, was also a prominent part of Jeremiah’s life and he and Zeus were inseparable. His smile, generosity, and true selfless love for others will be missed greatly by all who knew him and he leaves a legacy of caring that will be carried on by each life Jeremiah touched. Jeremiah leaves to cherish his memory his parents, Scott and Michelle Trosper; sisters: Bethany Trosper and Jessica Faulk; niece, Zoey Trosper; grandparents: Ron and Vicki Trosper, Gordon and Bonnie Guile; great grandmother, Deen Hood; great grandfather, Oscar Trosper; thirteen aunts and uncles; many cousins and their families as well as great-aunts and -uncles, extended family and a host of friends who loved him and will miss him dearly. A Celebration of Life for Jeremiah will be 2:00 pm, Saturday, December 8, 2018, at Crossover Baptist Church, 22130 FM 429 N. Terrell, Tx 75161 where the family invites all to come and share stories and tributes to his memory.

Jeremiah David Trosper, beloved son, brother, nephew, cousin, uncle and friend, passed away on December 3, 2018 in Dallas. Jeremiah was born February 19, 1993 on a military base in Italy to proud parents, Scott and Michelle Trosper and was... View Obituary & Service Information

The family of Jeremiah Trosper created this Life Tributes page to make it easy to share your memories.

Send flowers to the Trosper family.