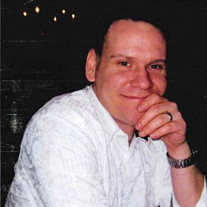 Jeremy Marc Pearson, of Terrell, passed away on December 31, 2019. Jeremy was born in Dallas, November 1, 1972, the beloved son of Mark Wayne Pearson and Sally Joyce Baker. When Jeremy closed his eyes here on earth, he opened them in Heaven and was greeted warmly by his grandfather, William “Bill” Pearson, who preceded him in death. Jeremy grew up in Terrell and graduated Terrell High School in 1991 where his many friendships lasted long after the last day of school. He was known for his smile and his kindness toward anyone, be that person a friend or a new friend, was legendary. Jeremy loved to fish and he also enjoyed playing cards where competition was fierce but always friendly. Jeremy was also known for being a loyal SportsRadio 1310 the Ticket fan and he was a major P1. Anytime spent with Jeremy at the house or in the car involved a lot of laughter while listening to the Hardline or watching the Old Grey Wolf and Corby on Ticket podcasts try and make heads or tails of what the Dallas sports scene was dishing out. He and his brothers and other friends were regular Ticketstock and GNO (Guys Night Out) attendees as well as making trips to multiple remote shows that were broadcast away from the “mothership” (KTCK studio). Many memories were made at all these functions where the hot sports opinions (HSOs) and ‘drops” were part of the experience! Jeremy loved his Dallas Cowboys and was a loyal and longtime fan who never wavered year after year. He worked at Oldcastle in research and development and his attention to detail earned him an enviable reputation among his colleagues as a team player and problem solver. This skill of problem solving also made sure that Jeremy had the skills to build “anything from anything” and his abilities to create, and most times improve, an existing project were known to many over the years. A man of loyalty, integrity with a great sense of humor, Jeremy will be missed by all who knew and loved him. He leaves to cherish his memory his children: Braeden and Brennen Pearson of San Antonio; their mother and his former wife, Robbie Jo Pearson of San Antonio; mother, Sally Green and husband, Chuck of Terrell; father, Mark Pearson and wife, Donna, of Terrell; brothers: David Pearson and wife, Beth, of San Antonio, and Jeff Green of Dallas; sister, Ashley Pearson Sanders and husband, Dustin, of Glen Rose, TX; grandparents: Carl and Betty Baker of Terrell and Johnet Pearson of Terrell as well as many aunts, uncles, nieces, nephews, cousins and a host of friends who loved him dearly. A celebration of Jeremy’s life will be at 1:00pm, Monday, January 6, 2020 at Episcopal Church of the Good Shepherd, 200 W. College St., Terrell, 75160 with Rev. David Faulkner as celebrant. The family will receive friends 2:00pm to 5:00pm, Sunday, January 5, 2020 at Max Slayton Funerals and Cremations. A private inurnment will be at Highland Memorial Gardens in Terrell. The family asks that in lieu of flowers, donations be made to the Juvenile Diabetes Research Foundation at www.jdrf.org.

Jeremy Marc Pearson, of Terrell, passed away on December 31, 2019. Jeremy was born in Dallas, November 1, 1972, the beloved son of Mark Wayne Pearson and Sally Joyce Baker. When Jeremy closed his eyes here on earth, he opened them in Heaven... View Obituary & Service Information

The family of Jeremy Pearson created this Life Tributes page to make it easy to share your memories.

Jeremy Marc Pearson, of Terrell, passed away on December 31,...

Send flowers to the Pearson family.