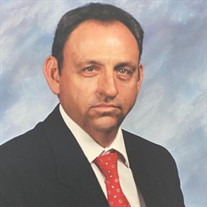 Life long Terrell resident Jerry Kines, 75, went to his heavenly home on January 2, 2021 after a short battle with sepsis. Jerry was born August 21, 1945 to Ruby and RM Kines. He married his childhood sweetheart, Margaret Nell Davidson Kines, on June 18, 1965, and they had a beautiful life together. Jerry was a devoted Christian, in the truest sense of the word, and an amazing family man. Nothing made him happier than being able to help someone in need. His loss will be felt by many people. He is survived by his devoted wife, Margaret Kines; his son Randall Kines and wife, Amber; his daughter, Gwendolyn Kines-McLeod and husband, Timothy; grandchildren: Brandyn Kines, Will Lamberson, Ariel and Jacob Ledkins, David Curtis, Meredith Curtis, Jake and Destiny McLeod, Justin and Julia McLeod, Shelby and Chacho Martinez, Julia Jane McLeod, Christian Burns, Danielle Burns Henry, Michael Burns, and Anna Burns Briggs; great grandchildren: Micah Younger, Noah Martinez, Autumn McLeod, Reese and Riley Ledkins,(and soon to be born) Katelina Rose Kines, as well as many nieces, nephews and many friends that Jerry felt were family. He was preceded in death by both of his parents as well as his two brothers, Jimmy Lee Kines and David “Doc” Kines. Funeral service will be at 11:00am, Wednesday, January 6, 2021 at First Assembly of God in Terrell with interment to follow at Morrow Chapel Cemetery. His family will receive friends 6:00pm to 8:00pm, Tuesday, January 5, 2021 at Max Slayton Funeral Home. In lieu of flowers, the family requests that you honor Jerry’s giving nature and help someone in need.

The family of Jerry Kines created this Life Tributes page to make it easy to share your memories.

Send flowers to the Kines family.