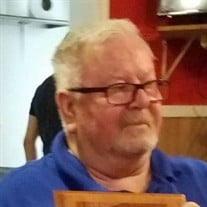 Jerry Michael Morgan, of Garland, passed away peacefully on April 2, 2019 with his loving family at his side. Paul tells us all in his letter to the Corinthian church that “to be absent from the body is to be present with the Lord” (2 Cor 5:8) and Jerry’s family takes great comfort in knowing that when he closed his eyes here on earth, he opened them immediately in Heaven where his Savior was waiting with open arms. Jerry was born June 7, 1952 in Royse City, Texas to Clint James and Altha Chrystean (Sherrill) Morgan, both of whom also welcomed him into Heaven along with his twin brother, Terry James Morgan, his grandparents, his brother-in-law, James Herod and nephew, Jeffrey Herod. Jerry began life as he lived it-serving in any way that he could for anyone that he could. He had his first job working at 16 with Safeway until they closed their stores in Texas. Having not only the knowledge for the grocery retail business but also the personality that made every customer feel like he was their best friend enabled Jerry to embark on a long and loyal career with Brookshires Grocery. He gained even more knowledge the old-fashioned way by working in every position including stocker, carry out, cashier, and then, management. Jerry worked at several Brookshires locations in Forney, Terrell and Quinlan until his retirement in 2017. His work ethic inspired so many coworkers because Jerry led by example in his commitment to exceptional customer service. His example of friendliness, helpful attitude to associates as well as shoppers, and his willingness to go the extra mile to place satisfaction in both shopping and working experience helped Jerry set the bar high in achieving the best “neighborhood grocery store”. Many young men and women having their own first jobs considered Jerry to be the “Best Boss” and a true inspiration to set their goals high and never settle for less than exceptional. He was a familiar face in any community he worked in and could always be counted on to help on any occasion. Jerry was a man who loved the Lord with all his heart and loved his family with all his being. His legacy of caring, kindness and loyalty will be cherished by all who knew and loved him. Jerry is survived by his “beautiful lady “ and fiancée, Brenda Horn, of Terrell; daughters: Stephanie Sales of Frisco, Brandi Keyes and husband, Joshua, of Las Vegas, NV; grandchildren: Hayley Morgan, Madison Sales, Savannah Sales, all of Frisco, Macy Martin, Tabitha Martin, Vegas Martin, Boston Keyes, Kensington Keyes, Remington Keyes, and Paxton Keyes, all of Las Vegas, NV; sisters: Virginia Herod of Garland, Sandra Johnson of Garland, Pat Humphreys and husband, Roger, of Sachse; aunt and uncle, Barbara and Elwood Smith of Mineola, Tx as well several extended family members, church family, numerous colleagues and a host of friends. Funeral service to celebrate Jerry’s life will be at 2:00pm, Saturday, April 6, 2019 at Max Slayton Funeral Chapel with interment to follow at Campground Cemetery. His family will receive friends beginning at 1:00pm to service time. In lieu of flowers, the family asks that donations in honor of Jerry’s service to others be made to Fellowship Baptist Church, 1550 CR 303, Terrell, TX, 75160 or to American Heart Association at www.heart.org.

Jerry Michael Morgan, of Garland, passed away peacefully on April 2, 2019 with his loving family at his side. Paul tells us all in his letter to the Corinthian church that &#8220;to be absent from the body is to be present with the Lord&#8221;... View Obituary & Service Information

The family of Jerry Morgan created this Life Tributes page to make it easy to share your memories.

Jerry Michael Morgan, of Garland, passed away peacefully on April...

Send flowers to the Morgan family.