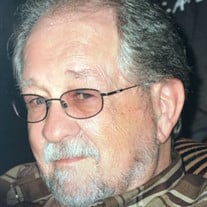 Jerry Petty passed away June 19, 2019 at his home in Dallas surrounded by his family. He was born on February 24 ,1941 to the late Buster and Virginia Petty in Brady, Texas. He was raised in San Angelo, Texas and married Wilma Henten Davis and together they had four children. Jerry had many different jobs throughout life. From driving trucks, working on freight docks and working in a machine shop. Later, he decided to return to school to pursue a career in the medical field. Jerry graduated from El Centro College in 1977 with an associate degree in nursing. In 1978 he started a career of psychiatric nursing at Terrell State Hospital. That is where he met his loving wife, Betsy. They married on February 29, 1980. Jerry cherished what he accomplished while being a nurse. He held himself and others working with him, and for him, with the highest standards and regards. Jerry would go on to serve as a nursing research coordinator at the state hospital when program was first developed. He also worked with pharmaceutical companies. Doing blind studies on patients for newly developed medications to treat schizophrenia. In 1987 Jerry moved to Missouri where he opened a Stress Unit in the town of Clinton. He served as Stress Coordinator until returning to Texas. Jerry was a man of many talents. He was an exceptional craftsman in wood working. Jerry also made jewelry. He very much enjoyed working with his hands. He also had such a beautiful way with words. He wrote lovely poems and even won some awards. He also wrote and published a book, “When Darkness Came Out to Dance” in 2010. There is no doubt about how proud his family was about all his accomplishment. Jerry loved life and found joy in every aspect of it. He loved his Texas and Louisiana family and friends with his whole heart. He will be very missed by everyone who knew him. Jerry is preceded in death by his parents, James and Virginia Petty, his brother Michael Scott Petty, his father in law Joseph “J.W.” LaCour; his sisters and brother in law, Mary Petty, Dixie Withrow LaCour and Justin Davis LaCour; as well as his nephew Gordon “Cody” Gunter. He leaves to cherish his memories his wife; Betsy LaCour Petty; his daughters, Lynda Gayle Odom (John) and Ruth Darlene Jones (Tim); sons, Steven Wayne Petty (Patty Michelle) and Jerry Earl Petty Jr.(Cindy) ; his grandchildren: Johnna Lynn Odom (Matt Jarrell), Onnie Pfalzgraf (Brandon) , Charity Bunch (Greg) , April McFrate (Charles) , Eddie Hammond (Danielle), Steven Petty (Cheyenne), Sheyna Petty (Dustin Duhon), Jerry (Jay Jay) Petty, Tracy Petty, John Petty (Raynee), Carissa Petty; his great grandchildren: Evan McDonough, Andromada Brazzell, Victoria Pfalzgraf, Bradley Bunch, Kelsey Bunch, Serena Hammond, Chloe Hammond, Aspen Duhon, Jolie Duhon, Waylon Petty, Emberlynn Reign Petty, Briana Petty; his brother, Jim Petty and sister, Sharon Sharrod; his Mother in law, Stella La Cour; and his sisters in law: Helma LaCour Rabal (Clifford) and Linnea LaCour Templin. As well as a host of extended family and friends. Funeral service will be 11:00am, Friday, June 28, 2019 at Max Slayton Funeral Chapel with interment to follow at Oakland Memorial Park. The family will receive friends 5:00pm to 7:00pm, Thursday, June 27, at the funeral home.

Jerry Petty passed away June 19, 2019 at his home in Dallas surrounded by his family. He was born on February 24 ,1941 to the late Buster and Virginia Petty in Brady, Texas. He was raised in San Angelo, Texas and married Wilma Henten Davis and... View Obituary & Service Information

The family of Jerry Petty created this Life Tributes page to make it easy to share your memories.

Send flowers to the Petty family.