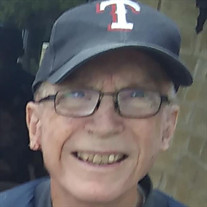 Jerry Bob Slayton passed away November 17, 2018 with family at his side. Jerry was born March 31, 1940 in Elmo, TX to Robert Leland and Anne Katheryne (Robertson) Slayton, both of whom preceded him in death. Jerry grew up in Terrell and graduated Terrell High School after which he joined the Air Force where he served proudly. He was honorably discharged in 1970. While stationed at Hickam AFB in Hawaii, he married the love of his life, Vivian. They were transferred to Andrews AFB in Maryland where their son was born. After Jerry’s discharge, he and Vivian relocated back to Texas. They were blessed with two daughters and raised their children in a loving, Christian home. Jerry worked for EDS for over 27 years and he was a member of Meadows Baptist Church. He also was a valued part of the Disaster Relief “Chainsaw Crew” ministry with Collin Baptist Men and Texas Baptist Men’s Association. Jerry also stayed active with the Plano Walking Club where he served as their group’s vice president. A man of integrity and honor, Jerry leaves a heritage of devotion to his family and loyalty to his friends. Jerry is survived by his wife, Vivian Slayton of Plano, TX; son, Doug Slayton of Denver, CO; daughters: Sonya Deanne Oler and husband Dannen of Ft. Smith, AR, Jeri Kathryn Marshall and husband, Scott of Richardson, TX; granddaughters: Kyla Oler, Lauren Oler, Sydney Marshall, Ava Marshall and Jessie Marshall; sisters: Jimmy Rebecca Moss and husband, Lonnie, of Terrell, Mary Kathryn Mills and husband, Harry, of Athens, TX as well as nieces, nephews, other extended family and a host of friends who will miss him greatly. Funeral service will be at 2:00pm, Tuesday, November 20, 2018 at Max Slayton Funeral Chapel with interment to follow at Oakland Memorial Park. The family will receive friends beginning at 1:00pm to service time. The family respectfully requests that in lieu of flowers, memorials be made in honor of Jerry to the Texas Baptist Men at www.tbmtx.org or to Collin Baptist Men Chainsaw Crew, 970 S. Highway 5, Fairview, TX, 75069 with Disaster Relief in the memo line.

Jerry Bob Slayton passed away November 17, 2018 with family at his side. Jerry was born March 31, 1940 in Elmo, TX to Robert Leland and Anne Katheryne (Robertson) Slayton, both of whom preceded him in death. Jerry grew up in Terrell and graduated... View Obituary & Service Information

The family of Jerry Bob Slayton created this Life Tributes page to make it easy to share your memories.

Send flowers to the Slayton family.