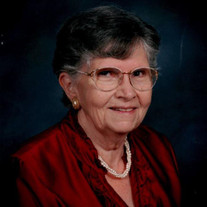 Jewel Garrett of the Lawrence Community passed away February 10, 2022 with her family by her side. She was born January 11, 1936 in Scurry to the late Claud Ernest and Mary Lillian Penny Tucker. She was preceded in death by her husband William Carl Garrett Jr., son in law Michael Shaddox and her siblings: Herbert J. Tucker, Roy Tucker, Loyd Tucker, Travis Tucker, Louis Wells, Lou Nell Ingram and Thurman Tucker. Jewel moved from Scurry to the Lawrence Community at 8 years old with her family. As a young lady, a gentleman driving a tractor caught her eye and she immediately made plans to ‘marry him’ and on November 6, 1954, Jewel did just what she said she would and wed William Garrett! Their marriage was based on love and faith and together, she and William raised their 5 children. Many in town would enjoy seeing her smiling face at Bass Rutledge Drug Store where she was a faithful employee for many years. At home, it was well known that the kitchen was Jewel’s domain where she was always whipping up something for the family to enjoy. Because of her spending so much time in her kitchen, Jewel was able to collect a remarkable 350 sets of salt and pepper shakers, each one a treasured collectible that she enjoyed displaying. She was an all- around talented woman who could cook, sewing clothes for her children and, later on, each grandchild received a handmade crocheted blanket, each stitch made with love. Jewel’s motto was “If it’s worth doing, it’s worth doing right” and she set a great example for her children to follow as well as to all who knew her. She enjoyed spending time with her family and would often be found out shopping with family and friends as they looked for the perfect item to give to each other for both special occasions and “just because”. A delightful and caring woman, Jewel will be remembered as a loving mom, grandmother, great grandmother, sister, aunt and friend by all who knew her. Surviving her are her children: Barbara Garrett Shaddox of Lawrence, Debra Davis and her husband Joe of Quinlan, Diane Milligan and her husband Mark of Quinlan, Jesse Garrett of Lawrence and Paul Garrett and wife Deborah of Ft. Stockton, Tx.; grandchildren: Charlie Carver and Fernando Servin, Mark Milligan, Jr. and wife, Caitlin, Samantha Milligan, Chad Davis, Joshua Shaddox, Britney Garrett, Jesseca Hunt and husband, Aaron and Crista Garrett; great grandchildren: Dylan Johnson, Ryder Johnson and Ava Rose; her good friend and niece, Phyllis Holland, and sister- in- law Joyce Tucker, as well as numerous other nieces, nephews, extended family and a host of friends. Funeral service will be 10:00 a.m., Wednesday, February 16, 2022, at Max Slayton Funeral Chapel with interment to follow at Chisholm Cemetery. Family will receive friends Tuesday February 15, 2022 from 5:00 p.m. to 7:00 p.m. at Max Slayton Funeral Chapel.

Jewel Garrett of the Lawrence Community passed away February 10, 2022 with her family by her side. She was born January 11, 1936 in Scurry to the late Claud Ernest and Mary Lillian Penny Tucker. She was preceded in death by her husband William... View Obituary & Service Information

The family of Jewel Garrett created this Life Tributes page to make it easy to share your memories.

Jewel Garrett of the Lawrence Community passed away February...

Send flowers to the Garrett family.