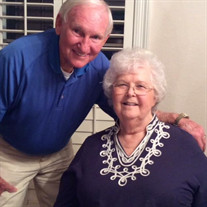 JoAnn Cowart, longtime resident of Terrell, went home to be with her Lord and Savior on the morning of December 23, 2018. JoAnn was born Sept. 9, 1937 in Hazlehurst, MS to Henry H. and Miriam E. (Dodds) Hennington. She was met in Heaven by her parents and her son, Ronald H. Cowart. Growing up in Hazlehurst, JoAnn attended and graduated from high school and then completed business school where she learned clerical and administrative skills. In June of 1958, she married J. Carmon Cowart (Sandy) and they moved to the Terrell area in 1968. When Sandy opened Terrell Pharmacy, JoAnn helped with the phone calls, customer service, and making sure that each person who walked into the pharmacy felt completely at home. She had a kind and patient personality that shined through to everyone who met her. For over 40 years of operation, the entire community knew that one of the benefits freely given with items shopped for was a good visit with JoAnn. She was a faithful and active member of First Baptist Church in Terrell where she served in the choir and alongside Sandy with the Gideons Auxiliary. During Gideon presentations and appearances, JoAnn could be counted on to reach out so that many could realize the impact that the Gospel can have in this world. Her ability to pray and selflessly serve others to further the Kingdom truly embodied what a Proverbs 31 woman was called to be. Serving her Lord was very important to her. However, JoAnn was also a dedicated wife and mother and her family was her priority. Over the years, she felt blessed to be able to support and attend her children’s activities, cheering them on as they grew up. She was even more ecstatic when she had the chance to attend her precious grandchildren’s events. Of all the successes that JoAnn achieved in life, being a Godly wife and mother to her family was her favorite accomplishment and the love she showed to each of them will be carried on into future generations. JoAnn leaves to celebrate her memory her husband, Sandy Cowart of Terrell; daughters: Tami Jo Brooks and husband, Carlton, of Canton, Tracey Ann Crowsey and husband, Bill, of Heath, Tara Lyn Duty and husband, Stokes, of Canton; grandchildren: Chase Harrison Cowart, Elizabeth (Liz) Brooks Thetford and husband, Taylor, Evan Joseph Brooks, Nathaniel Jacob Crowsey and wife, Crystal, Jordan David Crowsey and wife, Dominique, Dylan Ryan Crowsey, Jackson Stokes Duty, Logan Ryan Duty and Dawson Michael Duty; great grandchildren: Harrison Shane Thetford, Tyson Jacob Crowsey, Heidi Rose Crowsey, and Elijah Jordan Crowsey; siblings: Dodds Hennington and Betty Rose Beach, both of Hazlehurst, MS as well as many other extended family members, church family and a host of friends. Funeral service will be at 2:00pm, Saturday, December 29, 2018 at First Baptist Church of Terrell with interment to follow at College Mound Cemetery. The family will receive friends 5-7:30pm, Friday, December 28, at Max Slayton Funerals and Cremations. In lieu of flowers and in honor of JoAnn's service to the Kingdom, memorials may be made to First Baptist Church, https://onrealm.org/FirstBaptistChu66550/Give, or mailed to 403 N. Catherine St., Terrell, TX, 75160 or to the Gideons International at: https://www.gideons.org/donate.

JoAnn Cowart, longtime resident of Terrell, went home to be with her Lord and Savior on the morning of December 23, 2018. JoAnn was born Sept. 9, 1937 in Hazlehurst, MS to Henry H. and Miriam E. (Dodds) Hennington. She was met in Heaven by... View Obituary & Service Information

The family of JoAnn Cowart created this Life Tributes page to make it easy to share your memories.

JoAnn Cowart, longtime resident of Terrell, went home to be with...

Send flowers to the Cowart family.