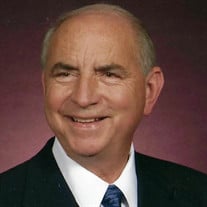 Joe McQuary Owen passed away peacefully at home with his family into the arms of Jesus, his Lord and Savior, on Sunday, September 2, 2018. Joe was born on May 25, 1940, in Olney, Texas to James and Stella Powell Owen who preceded him in death. Joe, a beloved and devoted husband, father, and grandfather, is survived by his wife, Gayle Owen, of Sunnyvale, Texas, who he married on August 7, 1965. He is also survived by his daughter, Kathy Owen Brown and husband, Chris, of Sunnyvale, TX, and his daughter, Julie Owen Noordsy of Garland, TX, as well as by his two grandchildren, Teague Noordsy and Sloan Noordsy. He was so proud of his daughters and grandchildren who were the light and joy of his life. He is also survived by a special aunt, Winnie McMichael, and sister-in-law, Jan Richardson, as well as nieces, nephews, and cousins. Joe was preceded in death by his son, Paul Curtis Owen, and his brothers: Jim, Eddie and Burl Owen. Joe graduated from Southern Methodist University with a degree in accounting and business. He retired from Lucent Technologies after 36 years where he received recognition for implementation of several innovative programs. Previously, Joe had worked as a licensed funeral director and mortician in Terrell, TX, where he met his wife. Joe’s faith in God and his family were the priorities in his life. Joe was active in First Baptist Church of Dallas and treasured his role as a Pastor’s Prayer Partner. Joe was an ordained deacon. and he was on multiple church committees throughout the years. Joe loved music and was in the church choir for many years. Most people remember Joe for his contagious smile and sweet spirit. A memorial service celebrating Joe’s life will be held in Truett Chapel at First Baptist Church of Dallas at 11 am on Friday, September 7, 2018. A reception in the Atrium at the church will immediately follow the service. There will be a private family burial at Oakland Memorial Cemetery in Terrell, TX. In lieu of flowers, donations may be made in Joe’s memory to the First Baptist Church of Dallas Pastoral Care ministry or Mission 1:8, Generation Now fund (1707 San Jacinto Dallas, TX 75201).

Joe McQuary Owen passed away peacefully at home with his family into the arms of Jesus, his Lord and Savior, on Sunday, September 2, 2018. Joe was born on May 25, 1940, in Olney, Texas to James and Stella Powell Owen who preceded him in death.... View Obituary & Service Information

The family of Joe Owen created this Life Tributes page to make it easy to share your memories.

Joe McQuary Owen passed away peacefully at home with his family...

Send flowers to the Owen family.