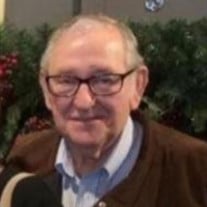 Not sure what to send?

Lanny Joseph Perry, of Terrell, passed away peacefully into the presence of his Lord and Savior on the afternoon of Saturday, May 7, 2022 with his loving family at his side. Joe was born June 19, 1944 in Madison, West Virginia and was preceded in death by his parents, Ross and Kathleen Pauley Perry; sisters: Sally Hawk and Suzzanna McDonald and brother, Gene Bradley. Joe spent his childhood there and in Dallas where he graduated from South Oak Cliff High School. After serving in the Air Force and in the White House Communications Agency, Joe graduated from Dallas Baptist University and Southwestern Baptist Theological Seminary. He pastored churches in Ida, Gainesville, Sherman, and Terrell. He became an educator and taught Social Studies in the middle school setting where he enjoyed making a positive impact on students, families, and co-workers. His career with Terrell Independent School District spanned 24 years. He and Sondra were both active members of First Baptist Church in Terrell where he served as a Deacon for many years. He was a kind, loving, and devoted husband, father, grandfather, and friend. He is survived by his wife of 54 years, Sondra Perry; his children Matt and Tara Perry, and Casey and Meredith Wiley; his grandchildren Julia Perry, John-Wesley and Alexandria Shelton, Hannah Perry, Caden Wiley, Autumn Perry, Morgan Perry, his brother and sister-in-law Fred and Carolyn Perry, numerous nieces and nephews as well as a host of friends and extended family. A celebration of his life will be held on Saturday, May 14 at 11:00 a.m. in the sanctuary of First Baptist Church, Terrell, TX. His family will receive friends 6:00pm to 8:00pm, Friday, May 13, 2022 at Max Slayton Funeral Chapel. Interment will be at 11:15 a.m., Monday May 23, 2022 at D/FW National Cemetery in Dallas, TX with military honors rendered by Air Force Funeral Honor Guard. In lieu of flowers, please consider a donation to FBC Youth or FBC Childrens’ Church Camp at https://fbcterrell.org/give. Pallbearers will be Caden Wiley, Casey Wiley, John-Wesley Shelton, Will Cardle, Ryan Perry, and Ken McDonald. Honorary pallbearers are David White, Jack Ables, and James Curtis.

Lanny Joseph Perry, of Terrell, passed away peacefully into the presence of his Lord and Savior on the afternoon of Saturday, May 7, 2022 with his loving family at his side. Joe was born June 19, 1944 in Madison, West Virginia and was preceded... View Obituary & Service Information

The family of Joe Perry created this Life Tributes page to make it easy to share your memories.

Lanny Joseph Perry, of Terrell, passed away peacefully into the...