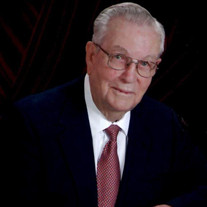 ***SERVICE WILL BE LIVESTREAMED ON FUNERAL HOME WEBSITE*** Joe Thomas Rogers Col. US Army (Ret.),95, of Terrell, Texas passed away at his home on January 28, 2022 following the failure of the Dallas Cowboys to win another Super Bowl. He was born on September 21,1926 on his parents’ farm to Mitchell Allen Rogers and Lola Mae Akin Rogers in Leonard, Texas. He was joyfully met in Heaven by his parents; his beloved wife Mrs. Jo; as well as his sister, Winnie Carter, and brother, Bobby Rogers. Joe graduated from Lone Oak High School in 1943 at the age of 16. He entered the Agricultural and Mechanical College of Texas in the fall of 1943 in the Class of 1947. Joe volunteered at the age of 18 for the Army Air Corps in 1944 and reported to duty at Sheppard Field in Wichita Falls for training. Joe spent 1945 going through basic training twice. His unit was considered surplus and he was honorably discharged from Ellington Field on November 8, 1945. He hitchhiked from Houston to College Station where we watched the Fightin’ Texas Aggies beat SMU 3-0 on November 10,1945. He joined the Army Reserves from 1946 – 1948. He served in the National Guard in the 49th Armored Division from 1949 – 1969. He returned to the Army Reserves from 1969 - 1979. He retired with the rank of Colonel in 1979 after 35 years of service to his country. Joe returned to Texas A & M in 1946 and graduated with a B.S. in Agricultural Engineering in August of 1947. After graduation, Joe married Hattye Jo Carr from Lone Oak, Texas at the Lone Oak Methodist Church on Saturday, November 5, 1949. They were lifetime partners for 63 years until her death on April 7, 2013. He went to work for the USDA Soil Conservation Service in Rockwall in 1949 upon graduation and later transferred to Terrell in 1957 and retired after 34 years of service from the SCS in 1982. He was a Registered Professional Engineer and a Registered Public Land Surveyor in the State of Texas. His post retirement years included ranching with Kenneth Moody, consulting and managing his grandchildren’s growth and discipline. Joe continued his life of public service by serving as president of the Terrell High School Booster Club, founder and president of the Terrell Evening Lions Club, president of the Terrell Summer Recreation Association and a past director of the Greater Terrell United Way. He served on the Board of Directors of Terrell Federal Savings & Loan from 1984 to 2003. Joe and his family joined the First Baptist Church, Terrell in 1957. He served in many capacities including being involved on the Building Committee where they master planned the Fellowship / Education building, the Recreation Outreach Center, and he oversaw the construction of the Fellowship/Education building in 1997 for the church. He also counted the Sunday offerings with James Crouch for 33 years. He is survived by sons and daughters-in-law Randy and Melinda Rogers, of Houston, TX; Bill and Synde Rogers, of Arlington, TX; and Steve and Debra Rogers, of Terrell, TX. Seven grandchildren and spouses: Mitchell Rogers and wife Michelle, of Dacono, CO, Adam Rogers, of San Francisco, CA, Meredith Rogers, of Houston, TX; Lieutenant(Chaplain) Jonathan Rogers USN and wife Kerri, of San Diego, CA; David Rogers and wife Brittany, of Arlington, TX; Jake Rogers, of Richardson, TX and Casey Rogers, of Terrell, TX. Nine great-grandchildren; Lyla and Lincoln, Dacono, CO; Caleb, Adalyn, Joseph and Levi, San Diego, CA; Casen, Madden and Kinsley, Arlington, TX; and a special niece, Martha Taylor, of Houston, TX, as well as cousins, nieces and nephews. A funeral service will be held at 3:00pm on February 5, 2022 at The First Baptist Church in Terrell officiated by Reverend John Lowrie and Reverend Ernie McCoulskey. Visitation will be February 4, 2022 from 4:00pm to 7:00 at the Max Slayton Funerals and Cremations 642 N Rockwall Ave., Terrell, TX 75160, 972.524.0881. Private interment will be at Oakland Memorial Cemetery in Terrell. In lieu of flowers, the family requests contributions be made to the charity of your choice or the Building Fund of the First Baptist Church, Terrell, 403 Catherine St., Terrell, Texas 75160, 972.563.7561, www.fbcterrell.org/give.

***SERVICE WILL BE LIVESTREAMED ON FUNERAL HOME WEBSITE*** Joe Thomas Rogers Col. US Army (Ret.),95, of Terrell, Texas passed away at his home on January 28, 2022 following the failure of the Dallas Cowboys to win another Super Bowl. He was... View Obituary & Service Information

The family of Mr. Joe Rogers created this Life Tributes page to make it easy to share your memories.

Send flowers to the Rogers family.