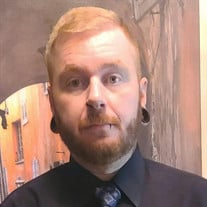 Joseph Mark Ward, known to all as Joe, passed away on Sunday, February 27, 2022, at his home in Terrell. He was born May 9, 1982 (a perfect gift on Mother’s Day that year) in Dallas, Tx and was preceded in death by his former wife, Steffanye Albertsen and his grandfather, Jerrell Ward, Sr. Joe grew up in Richardson and attended Richardson public schools where he had many friendships, many of which continued to present day. He and Steffanye were blessed with their beautiful daughter, Mila, who was a joy to the both of them. Joe loved being a dad and was committed to being the best father he could be. He worked as a utility locator and, when not at work, he was on the go all the time spending time with family and friends. He enjoyed grilling and could cook a steak to perfection. Joe also had a passion for music, cars and the Dallas Mavericks. He loved helping animals and there was never a time Joe was without a dog or cat that he had adopted. Joe’s sense of humor was also enjoyed by his family and friends and he will be missed by all who knew him. He is survived by his precious daughter, Mila Evangeline Ward of Wylie; father, Dennis Ward and his wife Cindy of Richardson; mother, Terry Norcross of San Diego, California; grandmother, Maud Ward and her husband, Don Rutherford, of Mesquite; half- sister, Angie Ward; uncle, Jerrell Ward, Jr., of Terrell, and Jason Prickett, a best friend who was more like a brother to Joe and also godfather to Mila as well as other extended family and friends, all of whom loved Joe greatly. A celebration of his life will be at 2:30pm, Saturday, March 12, 2022 at Max Slayton Funeral Chapel with Joe’s family receiving friends beginning at 2:00pm.

Joseph Mark Ward, known to all as Joe, passed away on Sunday, February 27, 2022, at his home in Terrell. He was born May 9, 1982 (a perfect gift on Mother&#8217;s Day that year) in Dallas, Tx and was preceded in death by his former wife, Steffanye... View Obituary & Service Information

The family of Joe Ward created this Life Tributes page to make it easy to share your memories.

Joseph Mark Ward, known to all as Joe, passed away on Sunday,...

Send flowers to the Ward family.