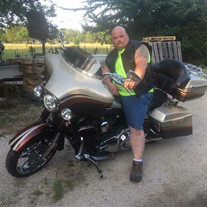 John David Anglin, beloved husband, father, son, brother, uncle and friend, passed from this life into the presence of his Savior on the morning of July 28, 2017. John was born October 13, 1978 in Pocahontas, Arkansas, the cherished son of Olivia and David. John was also met in Heaven by his grandmothers, Gladys Green and Aline Anglin as well as his father-in-law, James Heald. John David was a giant of a man-not only in stature but also in heart and devotion. Always a genuine smile on his face, John could, and DID, bring laughter and joy every time family and friends got together. He loved completely and made sure that each person in his life knew exactly how much he loved them. Many memories were made with John and his personality was so wonderful that he “fit” every moment with others. A hard worker who had an excellent work ethic, John worked as the manager for the tire center at Love’s Travel Stop in Van, Texas where his honesty and integrity won both admiration and respect among customers and colleagues. He graduated Terrell High School in 1997 and on March 26, 2005, he married the love of his life, Kati. With his soulmate at his side, John’s love of life took on a new perspective as his extended family provided him with many more people to cherish and nieces and nephews for John to endlessly spoil. A child at heart himself, John would plan the best trips for them to enjoy the outdoors. His own hobbies of mudding in his Jeep and practicing shooting with his guns provided hours of fun and endless, treasured memories for those who loved their “Uncle John”. John felt that every day presented a new opportunity to dream big, live big and love greatly and this legacy is what his family and friends will carry forward until they, also, can be reunited with John David. Those left to carry on his heritage of unconditional love are his treasured wife, Kati Anglin of Terrell; mother, Olivia Lowder and husband Doug, of Flint, Tx; father, David Anglin and wife, Deb, of Arkansas; grandparents, Leon Green and wife, Sherry, of Terrell and Bill Anglin of Arkansas; mother-in-law, Theresa Heald of Terrell; parents-in-law, Lyndie and Lynn Goben of Illinois; sister, Amanda Balius and her husband Matt in Florida; stepbrother, Michael Whitmire of Arkansas; stepsister, Michelle Sanders and husband William of Arkansas as well as his beloved nieces, nephews, extended family and a host of friends near and far who will miss him greatly. “Those who walk uprightly enter into peace; they find rest…” Isaiah 57:2 A celebration of John’s life will be at 2:00pm, Wednesday, August 2, 2017 at First Baptist Church of Terrell, 403 N. Catherine St. The family will receive friends 6-8pm, Tuesday, August 1, 2017 at Max Slayton Funerals and Cremations. In lieu of flowers, the family asks that contributions be made to the Sons of Confederate Veterans Texas at www.scvtexas.org.

John David Anglin, beloved husband, father, son, brother, uncle and friend, passed from this life into the presence of his Savior on the morning of July 28, 2017. John was born October 13, 1978 in Pocahontas, Arkansas, the cherished son of... View Obituary & Service Information

The family of John David Anglin created this Life Tributes page to make it easy to share your memories.

Send flowers to the Anglin family.