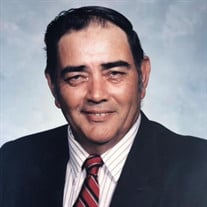 ***At the request of Mr. Darden's family, his service will be Livestreamed on our Facebook page, Max Slayton Funerals and Cremations. Please "like" our page and the notification will appear when the funeral becomes available to view*** John Darden, longtime Forney resident, passed away at home on Friday, January 8, 2021. John was born in Lamar County, Texas on September 25, 1938 to John Haskell and Myrle Marie Chancellor Darden, both of whom preceded him in death along with his brother, James Darden, brother-in-law, Jim Crow and sister-in-law, Shirley Darden John graduated from Roxton High School and, in 1959, married Floy Crow at the Chisholm Baptist Church. After making their home in Forney, John became very active in the community where he served on the Forney Volunteer Fire Dept for 43 years and was Fire Chief during a part of that time. He was also elected to Mayor Pro-Tem of Forney for 12 years and Kaufman County Pct. 2 Commissioner for 12 years where his honesty and integrity were essential parts of his service to the county’s residents. John also owned and operated Darden’s Grocery and Station for 15 years in Downtown Forney where many of the Forney folks would often gather and share the local news and goings-on in the town. He was a member of Brooklyn Lodge 386 AF&AM for 48 years along with his membership with the Hella Temple and Shriners. John celebrated his heritage and was a proud member of Choctaw Nation of Oklahoma. He also served on the board of Kaufman County Senior Citizens and on the original Kaufman County Appraisal Board and a member of both the Forney and Hughes Springs Booster Clubs. As strong as his commitment to his community and county was, John was best at being a great husband, father, and grandfather. He loved attending all his grandchildren’s games, no matter how far away, so that he could be their biggest fan and supporter. A kind man with impeccable principles, John will be missed greatly by so many as well as the community that he helped grow into what it is today. He is survived by his wife Floy Crow Darden of Forney; daughter, Susan Rigby and husband, Bob, of Rowlett; grandchildren: Jonathan Rigby and wife, Maegan, and Heather Wright and husband, Shawn; great grandchildren: Caroline and Beau; brother, Harold Darden; sisters-in-law: Wilma Darden, Malinda Looney and husband, Sam, Gayla Cutrer and husband Rob, Carol Crow and Sue Gheen; brothers-in-law: Bill Crow and wife, Christine, Buck Crow and wife, Kathy and Paul Crow as well as numerous nieces, nephews, other relatives and a host of friends. Funeral service will be 1:00 pm, Tuesday, January 12, 2021, at Max Slayton Funeral Chapel with interment to follow at Hillcrest Cemetery. The family will receive friends 6:00pm to 8:00pm, Monday January 11, 2021, at the funeral home.

***At the request of Mr. Darden's family, his service will be Livestreamed on our Facebook page, Max Slayton Funerals and Cremations. Please "like" our page and the notification will appear when the funeral becomes available to view*** John... View Obituary & Service Information

The family of John Darden created this Life Tributes page to make it easy to share your memories.

Send flowers to the Darden family.