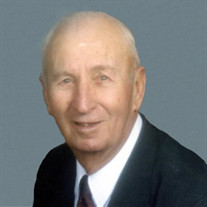 John Edwin Buice passed away peacefully on May 23, 2019. He is survived by his two daughters, Janie Buice of Wimberley, Texas and Judy Buice of New Braunfels, Texas; grandson, Walt Harris (Sarah) of Llano, Texas; great grandchildren, Hadley and Hays Harris of Llano, Texas; sister-in-law, Barbara Buice of Ohio, sister-in-law, Frances Gruwell of Colorado; and a number of nieces, nephews and other family and friends. Ed was preceded in death by wife, Carlynn Buice; brother, Ernest Buice; and parents Garland and Kate Buice. Ed was born in Dallas, Texas on July 1, 1925 to Garland and Katie Anderson Buice. He lived in and around the Dallas area most of his young life, moving with his parents and brother once to Idabell, Oklahoma and once to Quinlan, Texas only to return shortly to the Dallas area. He graduated from Irving High School in May of 1942 and of course history dictated the next few years of his life. He left Dallas on a train to California the following October and served his beloved country for the next 3 years in the United States Navy. During this time while he was away, his parents purchased a farm in Kaufman County just outside of Forney where he returned after his days of service. He married the love of his life, Carlynn Loftin in 1950 and remained in Forney for the next 47 years where he raised his daughters, living a life so richly blessed by God. He provided for his family working in the construction industry for 42 years in addition to the farming and cows and calves he raised. He taught Sunday School and served in many different capacities at First Baptist Church in Forney over the years. He moved to Wimberley in 1997 and was able to share and enjoy in the lives of his children and grandchildren. While serving at First Baptist in Wimberley, he, along with several others started the Carpenters Helpers group which has grown into a ministry reaching far and wide for God’s glory. Ed will always be remembered for his stories and wit, hard work, patriotism for his beloved country and a genuine love for others. Funeral service will be 11:00 am, Tuesday, May 28, 2018, at the First Baptist Church Forney. Interment to follow at Hillcrest Cemetery in Forney with military honors. Family will receive friends beginning at 10:00 am, Tuesday, one hour prior to service time. Contributions can be made in his memory to First Baptist Church, P. O. Box 97, Forney, Texas 75126; Carpenters Helpers of First Baptist Church, 15951 Winters Mill Parkway, Wimberley, Texas 78676; or Hope Hospice of New Braunfels http://www.hopehospice.net/donations.

The family of John "Ed" Edwin Buice created this Life Tributes page to make it easy to share your memories.

Send flowers to the Buice family.